Our smaller propane tank has a very small leak around the regulator and, understandably, the propane company wants it empty before they work on it. It was getting very low and the past few days, we’ve had night time lows in the teens and I just knew we were going to run out of propane during the middle of the night. Our heater doesn’t come on much at night because we keep it set at 55 – 58 degrees but the thermostat is programmed to come on at 5:30 a.m. so we don’t have to wake up to a freezing cold house. All we had to do when the tank ran out was for one of us . . preferable the “other” one of us . . would have to go out and flip the switch to go to the bigger tank, which is full. Every night, I would say “Have you checked the propane level?” and Vince’s response was always “when it runs out, we’ll know it!” I had been checking it every day . . it went from 10% to 7% and the last time I looked, it was at 5%. You know what the worst part of a freezing cold house is? Sitting on the toilet seat and that’s something that affects girls way more than boys! My only solace was that if the tank ran out early in the night and we didn’t notice til we woke up . . . Vince takes the first shower in the morning and I was all set to say “when it runs out, we’ll know it!”

Yesterday we turned the heater off when we left the house in the morning and when we got home from being out almost all day . . it was just getting dark. I flipped the heater on, turned the thermostat all the way up to 64 . . which is about as warm as I can stand. After we unpacked the car and did a few things, I realized the heater had never come on. I turned the stove burner on.  Nope . . we were out of propane. 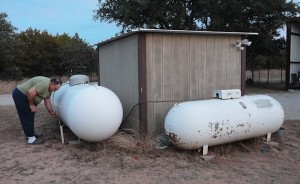 I hope one of the things we do soon is paint that smaller tank.

Vince had to re-light the water heater. The furnace re-lights itself . . which is good since it’s in the attic. We’re back in business and as soon as the cost of propane goes down a bit . . probably about May or June, we’ll get the propane guys out here to change out the parts on the old tank, refill both tanks and we’ll be all set.