My fears have been confirmed . . I am officially a food snob. Recently while grocery shopping, I noticed myself looking at the items in other shoppers’ carts. I found myself feeling sad for those folks whose carts were full of frozen-pop-in-the-microwave foods, cake mixes, sugary cereals, processed meats and the like.

Today I was in the grocery store and I found myself wanting to stop and tell the shoppers .. don’t buy that stuff! But I refrained.

A friend and I were chatting the other day about how we’ve turned into food snobs and she said “People were probably looking at our carts a few months ago and thinking the same thing!” and I know that’s true.

At Kroger, the checkout lady did notice that I only had meat and veggies and she said “Someone’s on a diet!” and I told her that I hope it’s a life change and not just a “diet”. 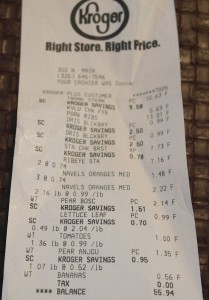 Then I went to Wal-Mart and that’s where the carts are really full of junk food. Just seeing what some people have in their carts and seeing how badly some people need to lose weight encourages me to work harder to eat more healthy. 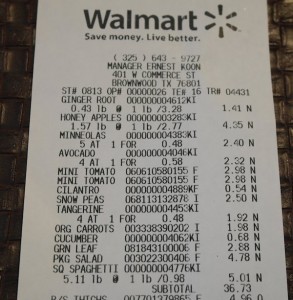 What’s funny is that almost all the things I buy now come from the produce or meat aisles and almost everything I buy goes into the fridge. I may not even need a pantry soon. 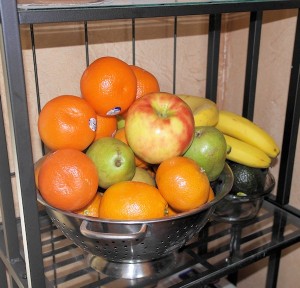 This is the fruit we’ll eat through the weekend. We’re not following the diet exactly because we are eating a lot of fruit but since we’ve cut out flour, potatoes, refined sugar and all soda, we’re doing fine and we’re still losing weight. I eat probably 2 servings of fruit each day and Vince is eating 3 servings but that’s working for us for now. 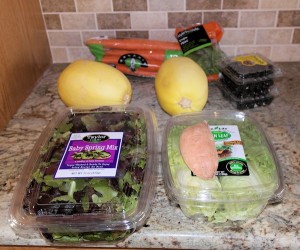 Lots of lettuce, snow peas, blackberries, spaghetti squash, one little sweet potato and carrots. It’s so much better than than the things I used to bring in from the grocery store and we didn’t eat really bad stuff before.

Both of us are amazed at how much better we feel and how much more energy we have. That’s what I would like people to understand .. it’s basically true — garbage in/garbage out. I’m spending less time in the kitchen now than I’ve ever spent. Meals are quick and easy.  We usually have meat, a veggie and a salad.  The veggies are things like zucchini, spaghetti squash, broccoli, any kind of greens, carrots — those kinds of things.

It feels good to be feeling good about what we’re eating!