Vince is always the one finding great deals so I was really happy to find one for myself.  I had always used Presto or Mirro canners because until moving here, I had glass top stoves. As soon as we moved her and had the gas stove, I bought an All American canner. You can read more about why I wanted the All American and some of my other canning experiences in this post.

I still use the Presto and Mirro canners when I need them but the All Americans are by far my favorites. I had been wanting to get the AA Model 910, which will do 4 quarts or 7 pints. Sometimes when growing your own veggies, you have to scrape bottom just to come up with 4 quarts of something. The larger canners don’t have to be full to operate but it takes more water, and it takes a bit longer and there’s just something about running a canner half full that bothers me. The 15-1/2 quart model I have holds 7 quarts and 10 pints and the 30 quart will hold 14 quarts and 19 pints.

Last summer I almost ordered the Model 910, which is the 10-1/2 quart size and then decided it was just too much money and I talked myself out of it.

I never look at Craig’s List but yesterday I was sitting here and decided to check out Craig’s List and even though we don’t have a whole category for our little town but I searched under our town and an All American Model 910 canner was listed. The ad was from back in November so I had no idea if it was still available.  I sent the seller an email and they responded that they still had it. 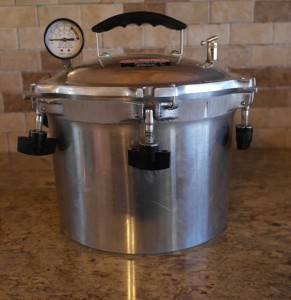 It sells new for $188 and he said he would sell it for $50. It’s an older model and has the petcock instead of the weighted gauge. For years I used a canner that only had the dial type gauge but now I prefer to use one that has the weighted gauge, though I love using the ones that have both a dial and weighted gauge . . kind of like having a backup system to be sure I’m maintaining the right pressure . . which makes all the difference in food safety when canning. 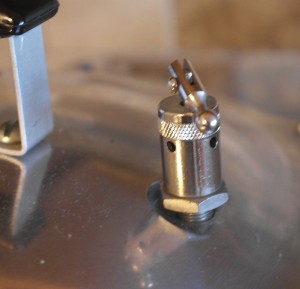 I’ve already ordered the parts to replace the petcock with a weighted gauge assembly and I ordered a new pressure plug in case the old one is dry rotted.

For about $80, I will have an All American Model 910 canner that will last the rest of my canning years and probably all of Chad’s canning years. The canner looks brand new and I’m thrilled to have it!