There was a Wollmeise update at The Loopy Ewe last week and that’s one  yarn I just can’t pass up. I love the tight twist, the color saturation . . the vivid, bright colors. I love the amount of yardage on each skein. So . . a whole bunch of it hopped into my cart and I checked out quick as a flash before someone else could cart jack me and take my yarn before I paid for it. Then . . I remembered I wasn’t supposed to be buying yarn. Darn it!  🙂 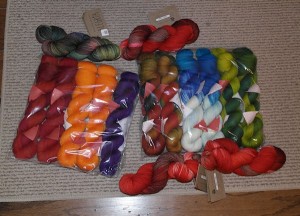 That’s 15 skeins added, and for the record, it’s 8,020 yards! Considering that most sweaters taken about 1,500 yards, and I can make about 1 sweater per month, IF no other yarn is purchased, I could be back in positive numbers by the end of June!  Crazy!

On the used side, I just finished Brier Island and between the swatching and the sweater, I used 6 skeins of yarn. The problem is . . most of the yarn I added was 500+ yard and the yarn I used was 250 yard skeins.