To make chicken and dumplings, start with a chicken!  🙂  One of my quilter friends whose family hunts and “lives of the land” to some degree, several years ago she posted that her daughter’s first or second grade class was asked to write their version of how to cook a turkey. This particular little girl went into detail about cutting his head off, cleaning the feathers and so on.  Her mom wondered how many others in the class started off with a turkey from the grocery store!  So . . our chicken was actually a rooster and that’s probably as much as most of you want to know!

Boil the chicken. I add salt, pepper, celery, onion and bay leaves to the water. As far as how much fat to keep, I cannot tell you because we skin our roosters and they’re usually fairly young and don’t have much fat. You do need some fat but probably not as much as you’re going to get from a storebought chicken with the skin on it.  I would boil the chicken, let the broth cool, put it in the fridge overnight, then skim off most of the fat and add it back as it seems necessary to get the “texture” of the broth that you want.

Also, I don’t like a ton of chicken in my dumplings so I probably use about half the chicken meat and save the rest for other dishes (chicken salad or add to gumbo).

For the dumplings, you will need:

Start by mixing 1 cup milk with all the above ingredients.  Add more milk as necessary. The dough will be a bit sticky but it should be not so sticky that you can’t roll it out on a floured surface.

Roll the dough out on a floured surface! Roll it thin, thin, thin!  It will puff a little. I try to get mine about as thin as a potato chip.

Dust the top of the dough with flour. Cut into squares or rectangles.

Allow the dumplings to sit out for about an hour. Dust the top with more flour if needed.  Flip them over and dust this side with flour. Let them sit out another hour. The sitting out makes them dry out a little and makes them a little more “chewy” rather than so “doughy”.

If you haven’t already, strain out the onions, celery and bay leaves from the broth. Bring the broth to a boil, then reduce heat to a simmer. Shake the dumplings gently to remove the excess flour, though you don’t want to remove it all. The flour will thicken the broth. Drop the dumplings one by one into the hot broth. Do not stir!  With a wide spoon or spatula, push them downward into the broth and try to keep them from all sticking together. 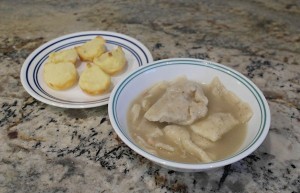 They’re actually better the next day!