Boots is such a sweet cat but I do believe he enjoys having time to himself too.  The past few days I’ve been in the sewing room more than usual and towards the end of the day, he gets a bit testy.  A few times, his playing has gotten rough and he has used his teeth, and then he got squirted with the water bottle and I firmly told him NO so I’m hoping that’s something we don’t experience often.

Yesterday he was stretched out on the ironing board near where I was working. 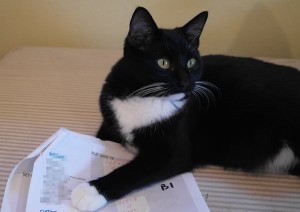 Not sure if you can tell from the photo, but he’s been chewing on my pattern! Then he was chewing on the ironing board edges. The ironing board is half a sheet of plywood, covered with several layers of batting, and then fabric so I’m sure it was fun to chew on but . . that’s not good!

He surely is growing and it’s a whole lot easier to sew with him around now . . but we still have our moments and the water bottle stays close by.

We’ve also stopped leaving food out for him at night. He seems to be gaining a bit too much weight. Vince said “Are you sure he’s not pregnant?”  Since he’s a male, been neutered and never goes outside, I’m pretty darned sure!