There’s hardly anything pumpkin that I don’t love.  I think what I like is more the spices that are traditionally used with pumpkin, rather than the pumpkin itself.

After Halloween, Tractor Supply had a whole bin of pie pumpkins, I think they called them sugar pumpkins, for .99 each.  I got a few so last week I roasted them and put the pumpkin in the food processor, then froze it . . 2 cups per bag, for making pies. Of course, I had to make a pie.

It was over the weekend when the weather was bad and I didn’t have any of the squirt whipped cream but I had some whipping cream so I whipped up a bit with some powdered sugar.  I was feeling quite smug . . pumpkin pie from pumpkins I cooked and whipped cream from cream I whipped!  🙂 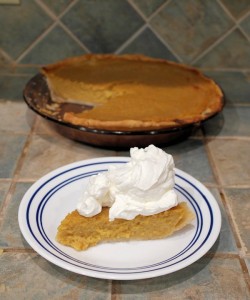 It was so worth the extra work!