Boots is the sweetest kitty ever . . so loving and snuggly, when I first go into the sewing room.  He loves to be held and wants every inch of himself snuggled against me.  I believe he would sit there all day as long as I hold him but once I begin doing things and have to put him, he gets energetic and crazy.

He wants to be as close to me as he can be . . if I’m at the computer, he’s on my lap; if I’m at the cutting table, he’s in his bed on the cutting table. If I’m at the sewing machine, he’s stretched out beside me either in my chair or on the sewing table.  I decided to bring his bed over to what used to be my little ironing table. He curled up in his bed and watched me sew. I got up to go iron and I looked at him and he had rolled over onto his back to get ea better view of what I was doing. 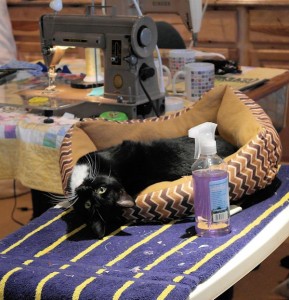 As I got closer to him, he scrambled to get on his feet. 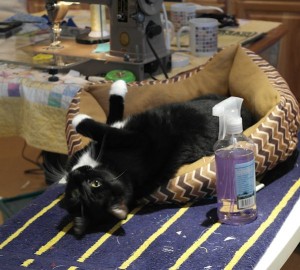 Isn’t he just the cutest cat?  I’m so glad he came to our house.

Until . . he turns into the evil kitty.  I was wearing sweatpants that were too long . . too bad I don’t stop and hem them but I probably never will. I guess the pants dragging on the floor and flopping around was just too much for him and he loved attacking the hem  . .  which usually meant his teeth went into my ankle. 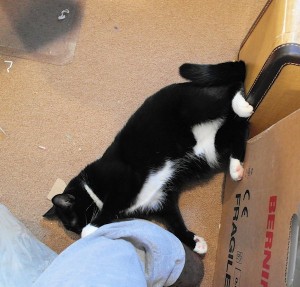 I love how he had his back feet up against a 301 sewing case  .. ready to shove off in pursuit if I tried to get away.

Since Boots’ arrival in the sewing room, things are surely different in there!  It’s nice to have a helper.