I feared I was going to run out of yarn for Guernsey Wrap so I really wanted to get finished with it and see what was going to happen.  I started knitting about 9 p.m. and had about 40 rows to knit.  Vince went to bed about 10:30 and I told him I was going to stay up for a while and try to finish the project. I texted a friend about 11:00 and we texted til my phone battery died.  She didn’t understand why I was still awake. She never sleeps!  I told her I was afraid I was going to run out of yarn.  She said “All that yarn . . you know you have something else that will work!” so I had to tell her about different yarn weights and dye lots, etc.

At about 1:30 a.m., I finished the wrap but I did have to leave off the last two rows of the last repeat in order to have enough yarn to finish.  I took a quick shower and while in the shower, remembered I had promised Vince sourdough waffles for breakfast and the sponge has to be made the night before.  I went into the kitchen to make the sponge and didn’t have enough flour.  I went to the sewing room, and since I had awakened Boots, I had to sit and hold him for a while.  Came back into the kitchen at 2:20 a.m. with a 20 pound back of flour.  Filled the canister, then filled two more plastic storage containers with the rest of the flour.  The sponge for the waffles was made and then the remaining sourdough had to be fed. By this time, I had awakened Vince . . he was pretty nice about it. At 3 a.m. I took Speck out and then I went to bed.  Wilbur began crowing at 5:30 this morning. I might have to make time for a nap today!

Back to Guernsey Wrap . . I was a bit aggravated that I ran out of yarn since my pattern calls for 650 yards but it has now been updated to show 650 – 700 yards required.  I had 750 yards and still didn’t have enough.  My gauge is correct and I followed the pattern exactly. 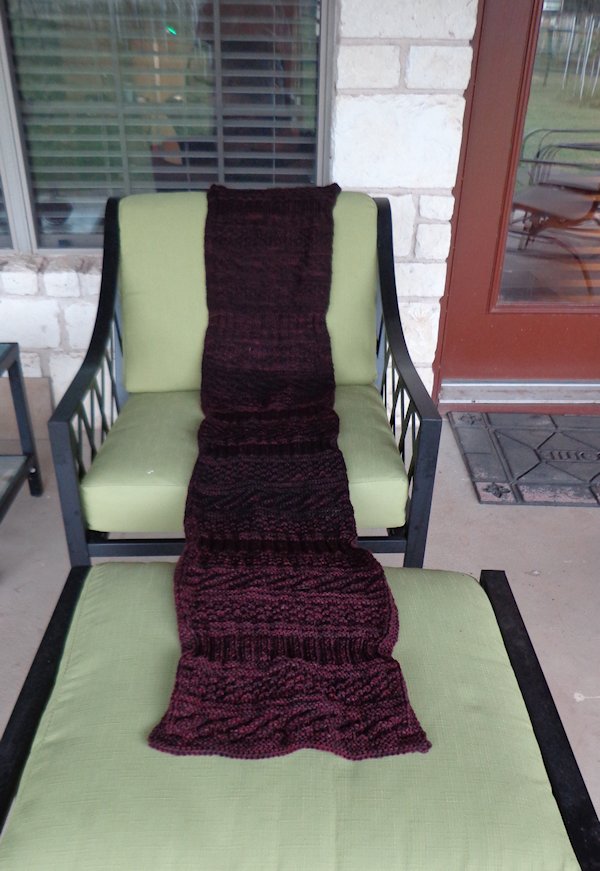 It looks like a red carpet, huh?  It’s very long!  It hasn’t been blocked yet and it’s 12″ x 66″.  It is supposed to block to 17″ x 74″ I think.  I believe mine will block to at least 74″ in length but I’ll be surprised if it blocks to 17″ in width.  If I were making it again, I’d knit each section once, along with the partial sections and maybe do the middle section twice and have it come out to being about 55″ long.  It’s really, really long.  I can see the advantage of it being so long but for my height and our climate, I think 55″ would be long enough. 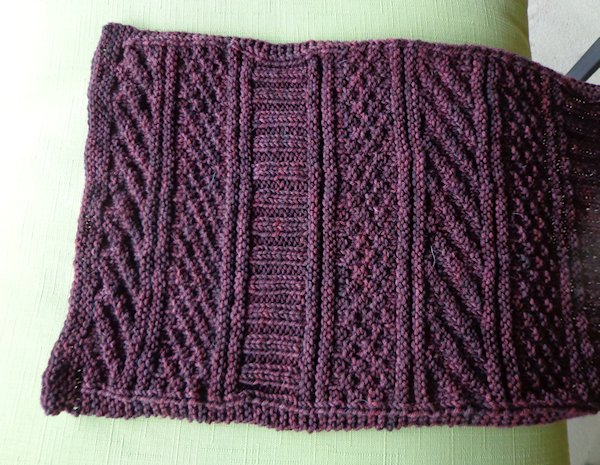 I love the texture of the stitches and can’t wait to see it after blocking. I’ll either get it blocked tomorrow or Monday and it will be finished.

Now . . what shall I work on next?  I’m going to keep the socks for a mindless knitting project but I want to start another fun project today.  Off to dig through my Ravelry queue.