Can you believe it?  I needed yarn! Who would have guessed that I would need yarn . . but I did.

I know that you think I’m just making excuses when I blame Denise for causing me to buy yarn but really . . just look at this with an open mind and I think you’ll agree that this little yarn buying incident is 100% Denise’s fault.

Yesterday she emailed me to ask if I had seen the new Art Deco pattern?  It’s by the same lady who did Dreambird. Oh, no!  I had not seen it but I love it and I bought it! 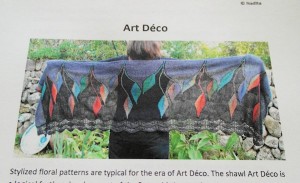 So . . if you have a pattern, you need yarn, right?  I don’t think there’s one skein of lace weight yarn in my stash.  This pattern calls for a bit heavier yarn at the top (the gray yarn) and a bit lighter yarn at the bottom (the black yarn) and another of those long changing colored yarns for the feathers or leaves.  Because the yarn the designer used is not available at my favorite shops, I had to do some research and calculating and more research.

Some yarn is described in meters and some in yards so I had to use a converter.

Some yarn is described in grams and some in ounces so I had to use another converter. 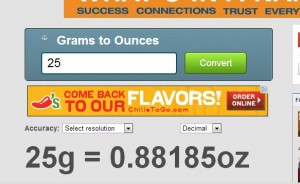 By the time I finished all that, that Chili’s ad had popped up a million times and I wanted to go to Chili’s for our afternoon meal! 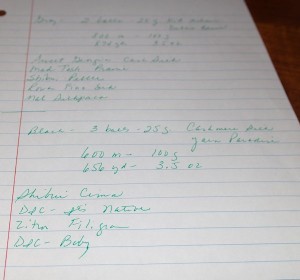 Shibui Pebble is the first one that caught my attention but I’m not sure how “tweedy” it’s going to look so I have a backup plan.  This is coming from Eat, Sleep, Knit. 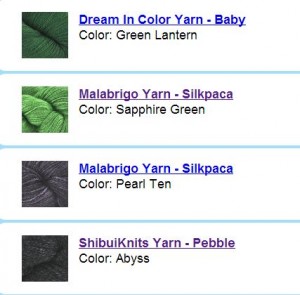 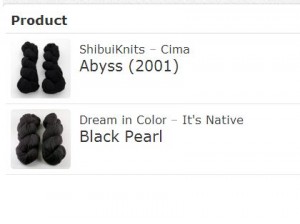 And because I felt pretty confident that Shibui Knits Cima and Dream in Color It’s Native would work, that’s my backup in case the Pebble is too tweedy.

Looks like another pathetic yarn report coming up but at least it wasn’t sock yarn I bought, huh?

Now if anyone wants to make Art Deco and wants to trust my yarn research and you don’t want to try to read my chicken scratch in green ink on the notebook paper, here’s what I came up with for yarns that might work:

For the gray (top denser yarn):