Over the past couple of days, I’ve been working on the tamale recipe from 365 Slow Cooker Recipes by Stephanie O’Dea.  It took a couple of days not because the recipe takes that long but because life at Chad and Nicole’s isn’t nearly so routine as life at our house. I put the meat in the crockpot on Thursday night, planning to have the tamales on Friday.  But I also roasted a chicken on Thursday night to have or dinner but Chad was late getting home (gotta love that job!) and by the time he got home, it was too late to have dinner so the chicken went into the fridge. Roasted chicken got moved to Friday night’s menu but we were gone the entire day, Nicole and I ate out at lunch and weren’t hungry for dinner and again . . Chad got home way too late to eat.  Chicken got moved to Saturday night, tamales were finished and frozen but we did all try one tamale each along with our chicken.

The roast been was made according to the recipe except that I forgot to buy the canned green chilies and had a can of green enchilada sauce for the chicken taco recipe so I used it instead of the chilies. 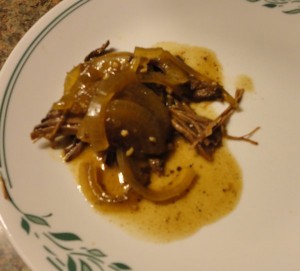 The roast beef was amazing!  We snacked on it plain, with just the gravy from the crockpot, it would make amazing open faced sandwiches on crusty bread and it was delicious in the tamales. 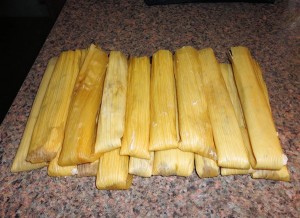 It’s hard to judge because I didn’t have the steamer that I usually use to cook my tamales and we had to cook them with just a little water in a pan but I think I like my regular “dough” recipe better but these weren’t bad.  For us, they needed way more salt than the recipe called for.  We made 3 dozen tamales from the recipe and that’s after we had eaten the roast beef several times.

The roast beef is probably my new favorite way to fix roast in the crockpot.  I’ll make more tamales using this beef recipe but I believe I’ll go back to my other dough recipe and continue to steam them rather than cook them in the crockpot.