Herbs and spices in the grocery store are outrageous.  There are some things that I don’t want to buy in bulk but other things, I’m happy to buy in huge quantities.  A friend mentioned recently that she was going to place an order with San Francisco Herb Co. and asked if I wanted to add anything.  Oh, yes! 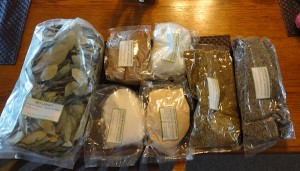 I ended up getting:

I am not real sure what the difference is in this Saigon Cinnamon as compared to the China Cinnamon or Vietnamese Cinnamon from Penzey’s except that I paid $4.80 for one pound and at Pennzey’s, the China Cinnamon is $18.90 per pound and the Vietnamese Cinnamon is $35.20 per pound.  I have used all three variations in the past and other than them all being a whole lot better than the cinnamon I typically bought in the grocery store, and the Vietnamese Cinnamon from Penzey’s smelling so unbelievably good that I wanted to eat it plain but knew better, I’m not real sure what the differences are in them all but for $4.80 per pound, I like the Saigon better already!  🙂

One pound of bay leaves is a tremendous amount of bay leaves but it was $6.35 for the whole pound!  Check your price in the grocery store and see how that compares.  I had a bay laurel tree and in 2001, while living in Kentucky, I forgot to bring it in one cold night and lost it.  In about 2002, I ordered one pound of bay leaves and divided them up and just a couple of weeks ago, ran out of them.  It took 11 years to use them all and I had shared them with friends. I had them on my grocery list and when I saw the price in the store, I said . . no way!  So I was happy when my friend mentioned adding a list to her herb order. 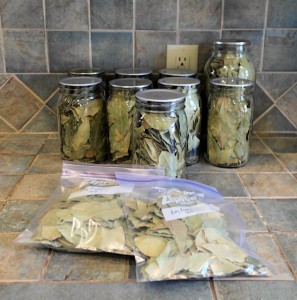 I vacuum sealed them into 8 quarts and 1 half gallon jars and filled 2 quart sized zipper bags.  I will again share them with friends but I will not be buying bay leaves for a very long time.  Not only do I cook with bay leaves (soups, stews, roasts, marinades, gumbo) but I add a few leaves to 5 gallon containers of flour, grain, cornmeal . . anything that I hope to keep bugs out of.  Also, I throw several into the containers full of yarn.  Whether it helps, I don’t know but I’ve heard it does and so far, I haven’t had moths in the yarn or bugs in the grain.

The other items I bought:

If you cook a lot and use a lot of herbs and spices, it might be cost effective to go in with friends and buy and split some of these big containers.  Spices and herbs do have a shelf life.  Most folks say to get rid of them after one year.  I don’t . . they’re just too expensive.  I’ll sometimes, after tasting a dish, add a bit more if the spices have become weak.  By the time the bay leaves have gotten 10 years old, if I needed 2 in a dish, I might add 4.  Keeping them sealed in jars, in a dark and cool storage area helps extend their shelf life.  Considering that I paid $6.25 per pound and what they cost in the grocery store, if a few of them completely lose their “power”, I’ll still feel like I got a great bargain.