Once upon a time, there was a grandma and a grandpa who lived on a farm. Let’s call them Bert and Howard.  Both of them had only known farming life in a rural area.  They grew up in a day when most folks didn’t have automobiles.  Their travel was limited.  They never expected to do much more than live on their little farm, have a few cows for milk, butter and beef, raise a pig or two for pork, have a big garden, take care of their land, raise their family and mind their own business.  They had no neighbors so they had no one to impress.  There were no “Joneses” to keep up with.

At some point, automobiles became popular, trails became dirt roads and later, those dirt roads were paved.  Somewhere along the way, Bert and Howard got indoor plumbing in their little house and they got a telephone.  It was a party line so if you wanted to be real nosie, you could listen to your friends’ conversation!  That’s probably when some folks in that area began their desire to have and do what the neighbors did!  A few years later, Bert and Howard had central air conditioning installed in their house.  They felt like city folks!

Bert and Howard worked so hard.  Up at daylight, tending the garden, feeding and milking the cows, feeding the pigs and chickens, mending fences, canning the garden produce, sewing clothes for the family . . they did it all by themselves and rarely went to the grocery store.  The last thing they needed was a TV.  There was no time to watch it and even if they had it, they would have been doing good to get one channel.

There was no need for a shopping mall.  If they couldn’t make it, they probably didn’t need it and even if they did need it, they didn’t have the money to buy it.

They did eventually get a TV and they turned it on once a week . . to watch Lawrence Welk.

Bert and Howard got old enough that it was time to leave the farm and move to town to be closer to their son and daughter.  They moved into a home on a small lot.  How things changed!  They had neighbors to watch!  They had a color TV with cable . . lots of channels!  They no longer had to feed and milk a cow, or feed chickens or a pig.  They no longer had to grow their own food.  They had lots of time on their hands.  Thank goodness for that TV!  🙂

This morning as I was sitting here laughing at Vince, I realized . . that’s what’s wrong with society.  Too many it seems, do not have enough work to do and too much time to watch TV or play video games.  Oh, yes . . some will likely comment with why they live in town but in my opinion, especially our youth . . they just don’t have enough constructive things to keep them busy and out of trouble.  And, when they do have down time, which I’ll be the first to admit that we all need, there’s too much negative influence and too many of us as parents, are not paying attention to what they’re doing, what they’re watching . . what’s being allowed into their heads and their hearts.

Maybe it was the way I spent my younger years but I have a real hard time sitting and being entertained.  I have to be doing something .  . knitting often fills that need.  In my heart I know that me knitting wool garments when I live in central Texas is just as much of a waste of time and money than someone sitting in a movie theater for three hours.  For me though, I’m doing something when I’m knitting so that makes it ok.  I’m not saying it’s wrong to go sit in a movie theater or sit for hours and watch TV . . it’s just not right for me.

Vince and I were sitting here and the chickens began squawking and making all kinds of noise.  I knew something was wrong so I got up to go check on them.  Yesterday there were two cardinals fighting out there.  I told Vince I thought one was trying to kill the other.  He thought they were doing other things.  Men . . is that all they think about?  🙂 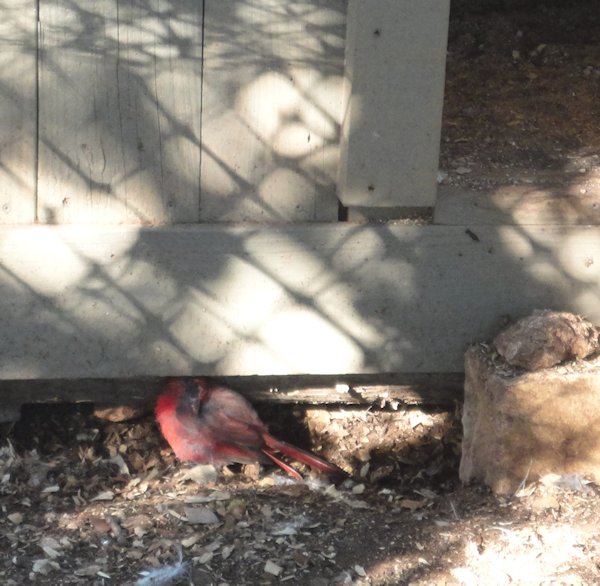 When I went out, I found the injured cardinal under the edge of the Silky chicken coop.  The Silkies are all in a panic.  I think they got that from me.  I panic easily.  🙂    By the time Vince got out there, he was deceased. 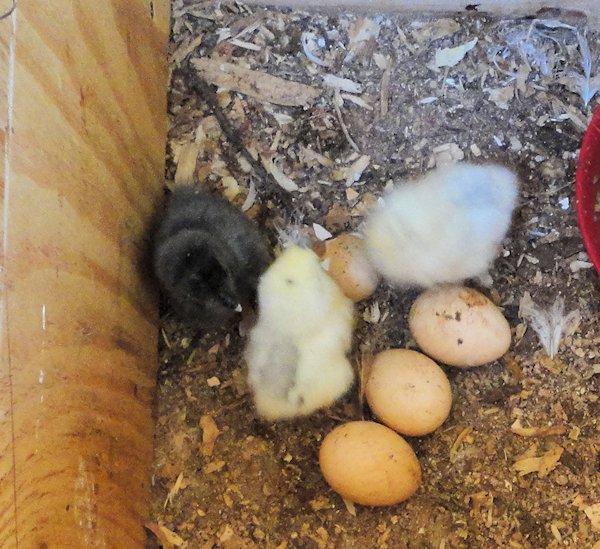 Sorry for the nasty egg picture.  If I knew how to use Photoshop, I would have cleaned them up but . . that’s how they look after having a mama sitting on them for 21 days.

Yesterday morning I checked on the new baby chicks and there were three .. two yellows and one black.  Vince said last night that when he looked in on them the black one was gone.  I didn’t think much about it because he’s usually not as careful when he looks at something like that as I am but when I went out this morning, I opened the big door and the black one was out of the nest and on the floor.  Thank goodness both Tiffany and Louise are claiming the babies .. both have been sitting on the nest, so Tiffany was on the floor keeping the black chick warm while Louise was on the nest with the two yellow babies.  It was a cool night and he would probably have not survived without Tiffany to keep him warm.

The babies hop out of the nest but then they haven’t figured out how to get back in.  It’s too high for them to hop up there and they don’t know how to fly yet. 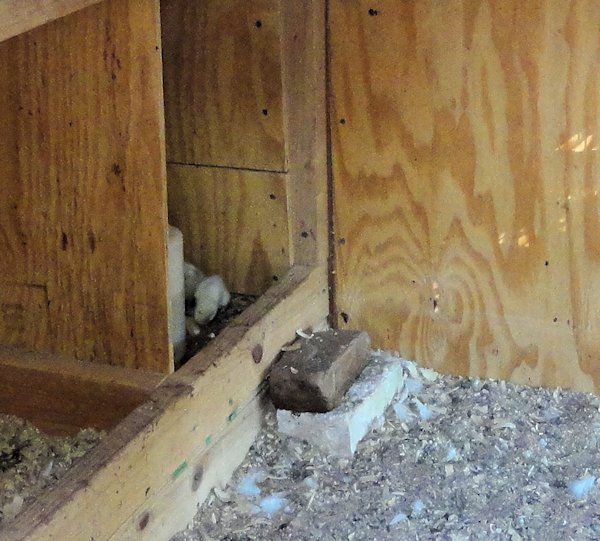 I came in from checking to see why the chickens were making so much noise.  I told Vince about the cardinal and about the Silky babies needing a step to get back into the nest.  He was in the middle of doing something else and was moaning that he had to stop one project and go take care of that.  Just before he went out the door, one of the smoke alarm batteries started chirping.  He looked at me and I know he was thinking about saying a bad word .. there’s always so much to do.

He came in from taking care of the cardinal and fixing steps for the baby chicks and said “We pretty much make our own entertainment around here, don’t we?”  Definitely!  I’m so happy that we’re finding pleasure by discovering things on our land, dealing with nature and when we’re bored, we take a ride through the woods, smell the cedar trees and fresh air . . we don’t need to go to a movie theater or a shopping mall for our entertainment.

I know our life isn’t the life for everyone. I’m happy that we all have choices.  I wish more people knew what it truly takes for them to be happy . . I feel like there are too many folks searching and never finding real happiness.  I’m so thankful we found our little piece of land in Texas and we’re enjoying every minute of it . . even dealing with crazy critters and chirping smoke alarms.