Last night, or rather . . very early this morning, I finished Dreambird. 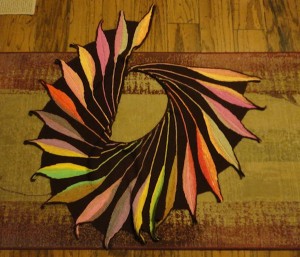 The yarn used in the feathers is Noro Taiyo Sock.  The yarn used in the background is brown  Cascade Yarns Heritage Solids & Quatro Colors.  It took one skein of the Noro yarn, and I cut off the first feather that I did because I felt the needles were too big.  I went from a 3.25 mm to a 2.75 mm needle and liked it a lot more.  I ended up with 21 feathers and would have had 22 had I not cut off that first one.  I might have been able to get one more feather out of the yarn. I wish I had weighed the remainder before doing the 21st feather and then I could have seen how much yarn each feather used and could possibly have gotten a 22nd feather. It’s a good size and I’m happy with it.  I used 1-1/2 skeins of the Cascade and 1 full skein of the Noro.

It has not been blocked yet but I will try to get that done in the next day or so. 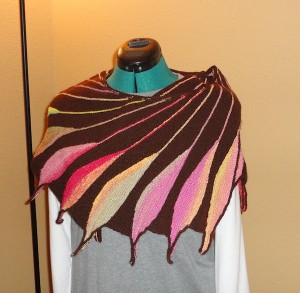 Here’s my pep talk!  If you knit, even if you’re not a terribly experienced knitter,  you can make this if you want to do it.  It is not hard, it is not confusing.  The first feather is a little weird but it simply is . . simple!  It took me almost exactly one month to get this done.  It was pretty easy to knit a feather and a brown “wedge” each night.  21 feathers in 31 days is because some days I just didn’t touch my knitting.

It’s just yarn!  If you buy the yarn and try it and it frustrates you, rip it out and make something else with the yarn.  If you never try . . well, quite simply . . you’re never going to make a Dreambird.  How sad! 🙁

When I showed this to Vince, he said “Did you ever think YOU could knit something so pretty?”  I just looked at him  .. like . . why not? He said “Do you remember how hard it was for you to knit that first pair of socks?”  How could I forget? But now I’m of the opinion that I can knit anything I want to knit . . and so can you . . it just depends on how badly you want to knit it!