The grasshoppers did a number on my loofah. Loofah takes quite a while to grow and mature, up to about 200 days of warm weather with no frost, which isn’t a problem here. I had started the seeds inside in cups so they could have a good start on a healthy and productive life but, as soon as I put them out, the grasshoppers chomped them right down to the ground.  At that time, it was a bit late to be starting new seeds.  There were no longer 200 frost free, warm days remaining but I planted a few more seeds in the ground and hoped for the best.  Those seeds sprouted and I believe the grasshoppers left two of the plants and ate the remaining ones. 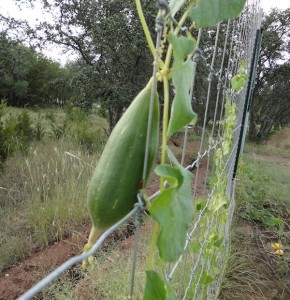 I will end up with a few loofah sponges, but not nearly as many as I had hoped to get.  Even one loofah sponge will provide me with enough seeds to plant next year so I am not totally disappointed.

When we lived in Kentucky, there was an old guy who lived not far from us and he grew loofah. Along the side of his carport, he had a trellis and it was covered in loofah.  I didn’t know what they were . . they looked like some kind of overgrown cucumber.  I couldn’t figure out why he was leaving all his cucumbers on the vine and being the nosy girl that I am, one day he was outside and I stopped and asked him about them.  He explained to me that they were loofah and told me all about growing, harvesting and using them.

I had seen loofah sponges in bath shops but, admitting my ignorance, I never thought of them as being something that was grown.  The man asked me to come back in about a month so I did.  At that time, it was harvest time and he showed me how they feel when ready to harvest and showed me how to peel and clean them.  He had a huge tub in the corner of his shop and it was full of loofah.

He gave them all away and he said people loved getting and using them.  He gave me a few, along with some seeds but I never had much luck growing them there.  In Kentucky and Missouri, the seeds had to be started indoors and the plants had to be half grown before they could be set out.  We had a much shorter growing season there.

Here, we have the longer growing season and they should do well but with the grasshoppers . . you know how that story ends.

My favorite uses for loofah are for a kitchen scrubby and a bath scrubby.  The few loofahs that I have will hopefully dry on the vine before rotting and they will be enough to get me through the year but I was hoping to have more so I could share them with friends.  Maybe next year . .