Writing is something I love to do.  Bet that’s a surprise . . that I love to write!  🙂  I write a whole lot more than what gets published here on the blog .. never anything really worthy of being published but I seriously love to write.

Several weeks ago I noticed there was going to be a writing seminar here in town so I told Vince I wanted to go and he said he would like to go too.  I was kind of apprehensive because Vince can be real critical and, not knowing the quality of the presentation, I didn’t want him feeling like he had wasted a Saturday morning.  After all, there is a water line to fix, a chicken coop to be cleaned, a garden to be tilled, an irrigation system to be finished and a kitty to be held!

We attended the writing seminar this morning. 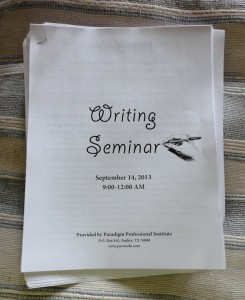 The instructor is a local guy and he was very knowledgeable and he was a great speaker.  He’s a Ph.D. in education I’m assuming because he was a school principal, has written dozens of books, and now has a publishing company for either homeschool or Christian schools . . maybe both . . maybe it’s all just one thing. As soon as he began speaking, he reminded me of my uncle, both in appearance, mannerisms and in the way he spoke.  My uncle is also a Ph.D. in education.  As soon as there was a break, I told Vince that the guy reminds me of my uncle and Vince said . . I was just going to tell you that he reminds me of your uncle.

So many things he pointed out really hit home with me.  One of the things he said was something like . . if you’re a writer, there’s always a story. I’m not saying I’m a “writer” because I am not . . I believe there’s a difference in loving to write and being a writer but when I’m outside especially, everything seems like a story to me.  A grasshopper eating a fig leaf, a roadrunner taking a dust bath in the front yard . . whatever I see is the beginning of a story that develops in my head.  Some stories are long, some stories are short and a particular story usually ends when something catches my eye and another story begins. Maybe that’s just how I entertain myself being here alone all the time. 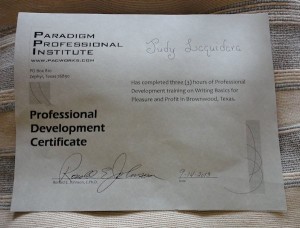 Vince and I have been having a little “issue” lately because sometimes I’m writing . . mostly when he’s reading or watching something on Netflix, and then he’s done with whatever he’s doing and I’m still immersed in my writing and he’ll say something to me. I never even hear him, even though I’m sitting just across the room.  Then he’ll gruffly say something like “Are you too busy to even answer me?”  Then I say “Sorry, I didn’t hear you.” and that is never the right thing to say but heck, I don’t have a clue what he said so it’s kinda hard to hold up my end of the conversation when I don’t know what he said.

The instructor mentioned today that it’s sometimes difficult living with a writer because they get so involved in their writing, they tune out everything and every one.  Vince was poking me in the ribs and saying . . that’s YOU!!  Then the instructor said . . sometimes when you’re writing, you lose track of your senses and you buy too much yarn!  No . . he didn’t really say that but he might have been thinking it!  🙂

It was an excellent class and Vince said he was glad he went . . which is saying a lot coming from him. Now, I’m even more enthusiastic about my writing but . . there’s laundry to be done and a garden to be watered . .