Today I was visiting with a friend who lives completely on the other side of the county and she was telling me that their grasshoppers are almost gone.  Maybe that means ours will be gone soon but they’re still here. 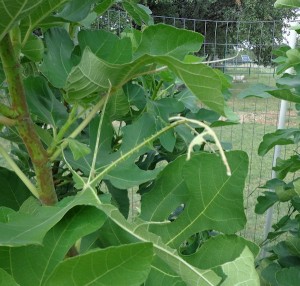 Can you see the leaf on the fig tree that’s been stripped? 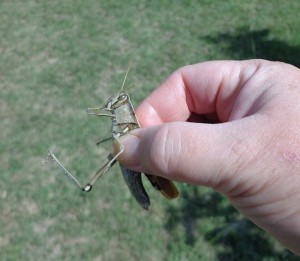 Found this one on the fig tree and he became a snack for the chickens.  He was already missing part of a leg but now . . he’s gone. 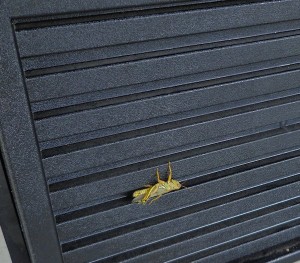 I guess it’s not enough that they’re eating my garden but this guy was apparently trying to get into the dehydrator to eat what I have in there.  He became another snack for the chickens.

I took the pepper plants out of the greenhouse yesterday and am letting them get conditioned to the sun before sticking them out in the garden and I’ve checked on them several times and so far, the grasshoppers haven’t bothered them.  One funny thing . . on my chili peppers, the grasshoppers aren’t bothering the green ones but the minute they turn red, the grasshoppers get them.  I wonder if it’s the color that is attracting them.  They doing a number on the okra but are mostly eating leaves and not bothering the okra pods so much. I guess that’s ok . . not much I can do about it because I won’t use any chemicals on the plants while I’m harvesting okra.  I’m getting more than I need so I’ll leave them alone and let them feast on the okra leaves and hope they leave soon.