The fence guy finished the high fence around the garden, and patched up the orchard fence.  He did some dirt work here and there. 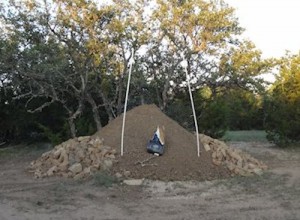 When it rains, which surely doesn’t happen often enough, the rain ran off the back of the implement shed and then the water was washing out the dirt foundation so the fence guy built that up and put rock up against the walls.  He still has to add more rock but that’s as far as he got.  He’s putting old metal shelves down, then covering them in plastic, then putting the rocks on top.  That should stop any erosion issues. 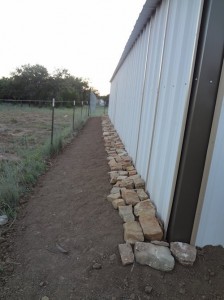 What I don’t understand is how that guy can work so hard when it’s 105 or worse out there.

Little by little, we’re getting things done that need to be done.  I wonder if ever we’ll get all the work done around here.  We won’t . . because we have so many things we want to do and one thing leads to another . . it’s all part of the dream!  Where would we be without our dreams?