His “surgery” went fine.  I think the vet forgot to tell him that he might need to take it easy.  They instructed me to give him a little bit of food around 7 p.m. so I put his food bowl on top of the fridge.  I was knitting and heard a noise, turned around and Boots had gotten on the counter and then on the fridge and had eaten the food that was in the bowl.  I had a bag of dry food for Speck on the cutting table and I thought it was zipped close but next thing I heard, he had gotten inside that bag and was eating Speck’s food. 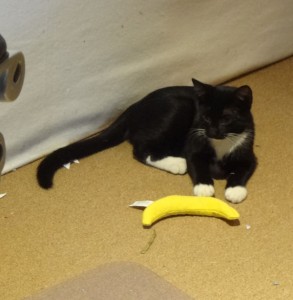 He’s been playing with his catnip filled banana but I think he was just about ready for a nap by the time I got the camera.

Then he found Speck’s bone. 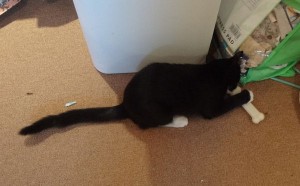 If it keeps him quiet and stops him from climbing the walls for a while, he’s more than welcome to play with it.  It’s time to get dinner finished so I guess I’ll stick Boots in the crate and leave him in the sewing room where it’s cool and then I’ll hang out in the sewing room with him after dinner.  This is almost like having a real baby around!