When I read about making hot soup in the Vitamix, I was intrigued.  How can a blender heat up soup? The explanations I’ve read say it’s “centrifugal force”. OK.  I’ll accept that . . doesn’t really matter . . but you know I had to try it.

For two reasons, a pumpkin soup recipe had caught my eye.  First, there was a little deli I used to love to visit and they served pumpkin soup and it was so good.  Second, I had all the ingredients in the pantry. 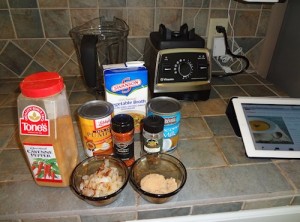 The only things I did different from the recipe was that I used the whole can of pumpkin, which I don’t think was much more than the required 1-1/2 cups but I didn’t want to deal with saving just a smidgen of pumpkin.  Also, I thought the soup was a bit thick with 1 cup vegetable broth so I added an additional half a cup of broth and really could have added more.  The soup was still quite thick and it was also quite delicious. 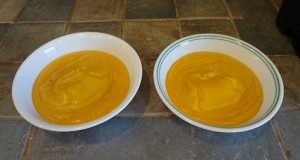 The recipe stated that you blend on high for 6 – 7 minutes or until heavy steam escapes the vented lid.  Heavy steam was escaping after 3 minutes and everything was nice and hot . . plenty hot enough to melt the cheese, so I stopped it then.  All the reviews I read talked about how wonderful this blender is for making soup and it’s not that I didn’t believe the multitudes who were bragging about the soup, but really . . how can a blender make soup without a heating element? Oh . . yes . . centrifugal force . . I forgot!  🙂  I’m here to tell you that it makes wonderful hot soup!

We added shaved parmesan cheese and a bit of fresh cracked pepper.

Vince said “This tastes so rich!”  It only had that 1/4 cup of coconut milk but with the ingredients whipped as much as they were, everything was very light and fluffy tasting . . although I’m not real sure “fluffy tasting” is a proper description but you know what I mean, right?

We both loved this soup and I’m dreaming of having this on a cold day with a grilled cheese sandwich.  Hmmm . . a cold day . . maybe in January we’ll have at least one cold day!  🙂

Tonight we’re having baked potatoes for dinner and I’m baking a few extra.  There are several soup recipes that called for leftover baked potatoes. You’ll be hearing about those recipes soon.