Speck was awake at 4 a.m. with a tummy ache.  Between 4 a.m. and 6 a.m., I was outside with him 6 times.  There wasn’t much sleeping going on.  A little after 6, Vince got up and stayed up with him and I went back to bed . . til about 6:45 when I was awakened by the sound of machine guns.  No, may neighborhood isn’t that bad . . it’s the military practicing behind us.  As I lay in bed thinking about the day, I wondered to myself how interesting a day could be that has already had this much excitement before 7 a.m.

About mid-morning, I needed to make a run to the mail box and asked Vince if he wanted to ride with me.  We hopped in the RTV, which is completely open . . 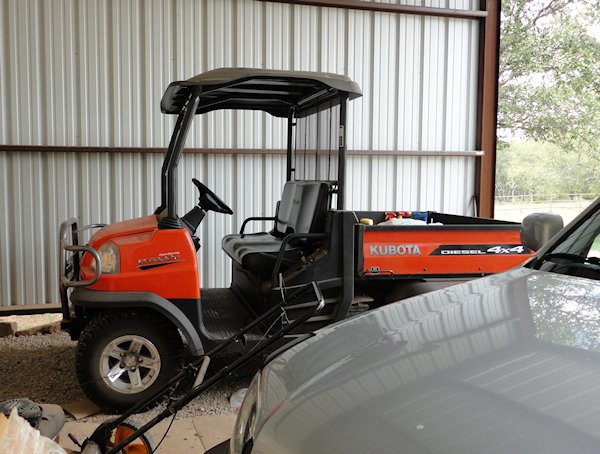 Before Vince even had the key in the ignition, we both looked at each other and said “CAT!”.  We heard meowing.  Vince got out to find the source of the meowing, mostly to be sure he wasn’t under the hood.  He was hiding behind “stuff” . . believe me, there are plenty of hiding places in and around the shop.  We called him and eventually he poked his head from behind some boards. 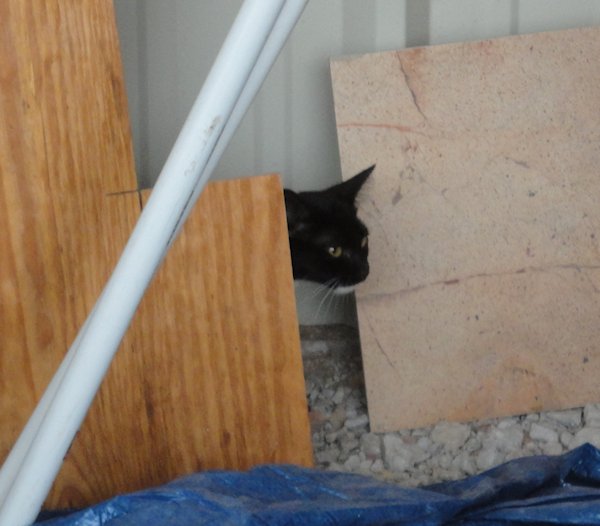 Vince opened a bag of cat food, which we bought because we are on a list to get barn cats through the feral cat program at the local animal shelter.  We gave him water too.  He was happy to get both. 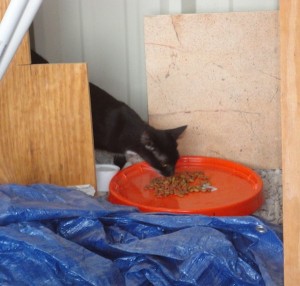 The chickens were out yesterday and they hang out in this area so I know he wasn’t here yesterday.

We went on our little ride to the mail box and took the scenic route back.  We weren’t gone long but when we got back, we had to find the kitty. 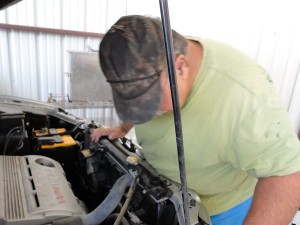 I said “Oh good!  Kitty has taken up residence in the Highlander.  Not a problem since we never use it!”  🙂 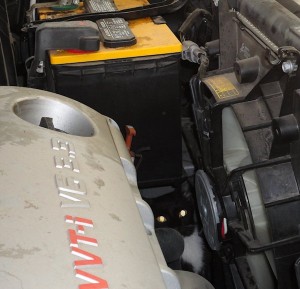 Nice!  There are so many hiding places under the hood!  Now we’ll have to be sure we know where kitty is before we start any of our vehicles. 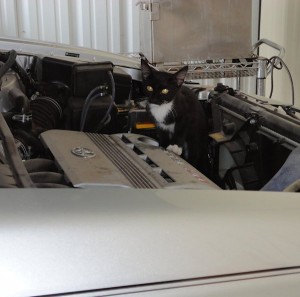 I’m explaining to kitty that she will have a lot better chance of surviving around here if she chooses a different vehicle in which to roost!  Vince is kinda picky about the Highlander! 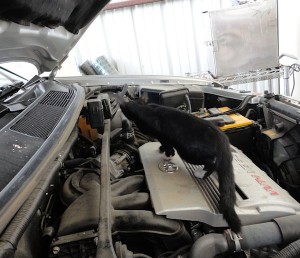 But, she seems to really like it under the hood of the Highlander.  I was waiting for Vince’s reaction but he appears to be liking kitty! 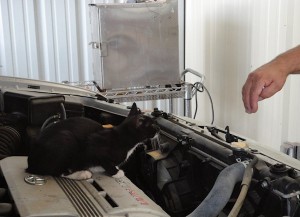 He’s even holding out his hand to see if kitty bites. 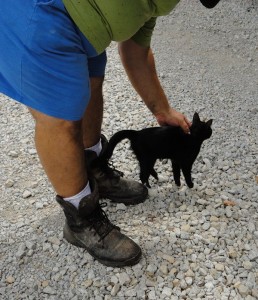 Vince and Kitty are Friends

Not only does kitty not bite, but kitty loves people!  Mr. People loves kitty . . Mrs. People (me) does not like cats!  I will not be unkind to kitty but I will not pet kitty and the purring makes my tummy do weird things.  I do not like cats!  Kitty wants to come and rub on my legs.  No way! 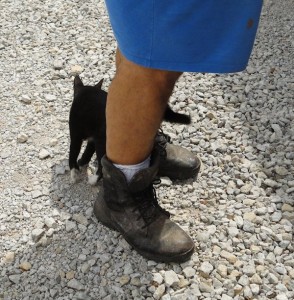 Kitty seems to think that as long as he positions himself right between someone’s feet, there’s a good chance that someone will reach down and pet kitty. 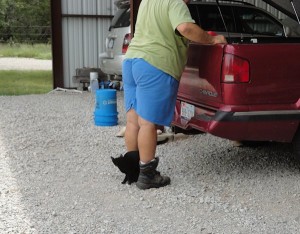 Vince came in a while ago and said “JUDY!  I cannot walk.  I cannot get anything done with a cat constantly between my feet!”  Hmm . . what do you think I’m going to do about that?

Kitty has already learned to come when Vince whistles.  We went to the neighbor’s for a minute and when we returned, Vince began whistling.  I said “I don’t think you whistle for a cat!” but he assured me that kitty comes when he whistles and sure enough, kitty came running.  Only problem is . . the chickens come when he whistles too but the chickens are penned up because it’s the weekend and the shop doors are open. 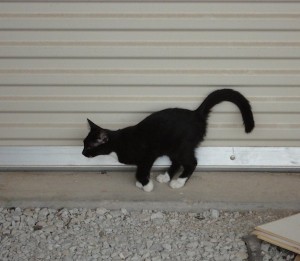 Yep, I think we have a kitty.  I think his name will be Boots because he has little white boots on his feet.  Monday, if he’s still here, he will go to the vet, see if he has a microchip and get checked.  If he isn’t microchipped, we’ll get his shots and get him “fixed” if he’s old enough.  Sure would be nice if he’s already fixed but I don’t think we’re that lucky.

I’m afraid he was someone’s house cat because he wants to come in when the door opens.  We live far enough away from people that I doubt he wandered over here on his own and he was pretty scared, but I’m also a little baffled that he made it all the way down the driveway if he was dumped at the gate.

Every farm needs a cat.  This one is cute and friendly so I can live with it.  If he’s used to being fed, he probably won’t be much of a hunter but you never know.  We’ll fix him a place to sleep in the shop so he’ll be safe and he’ll learn to go in there at night before we close it up.  That way, the coyotes won’t get him and hopefully he won’t sleep on top of our cars!