First, this is not an apology but merely an explanation.  Those who have been reading the blog for years know that I generally blog 3 or 4 times a day and lately, I’ve been doing good to get one post a day done.  How many ways can I say “I spend the day canning tomatoes”?  I’m here, I’m well and working non-stop to get the garden produce preserved.

This afternoon we had a 4:30 vet appointment.  We once had a chocolate lab and it was so hard for me to take him to the vet by myself but I did it.  Then I said that I would never have a dog I couldn’t pick up and carry in my arms.  Speck is a mini-dachshund and I cannot take him to the vet by myself!  He screams like someone is standing on his tail the entire time we’re waiting and the whole time we’re in with the vet.  So, Vince has to go with me to take a 12 pound dog to the vet!  With a 4:30 appointment, I pulled a veggie lasagna dish from the freezer and we had that with spaghetti squash from the garden! 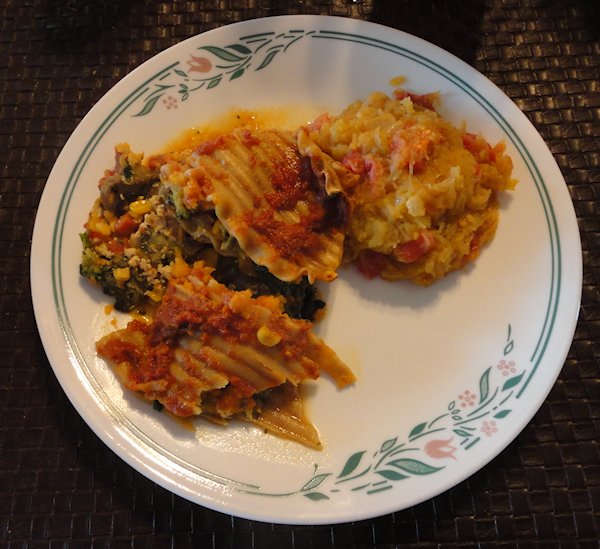 It’s so nice to have good dishes in the freezer that I can heat up and we don’t have to go out to eat when I don’t have the time to cook.

This is the first time I’ve grown spaghetti squash and this was the first one I’ve harvested.  Out in the middle of the orchard area, I have a “melon patch” which has watermelons, honey dew melons and cantaloupe.  Over near one of the fences, I have a patch where I planted loofah, pumpkins, spaghetti squash and some gourds.  The grasshoppers moved in soon after everything sprouted and ate everything and I replanted the leftover seeds and now I’m not sure which plants are what.  I wasn’t sure, but was pretty sure that this was a spaghetti squash.  Notice the peppers, parsley, tomatoes and one egg on the counter.  There’s always a single egg left somewhere around here. 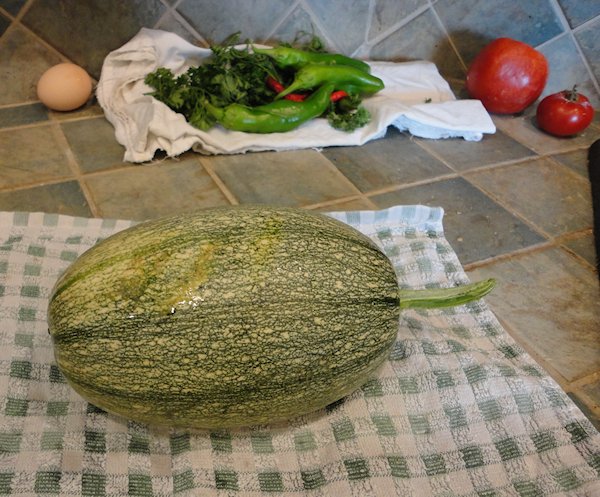 There has been a little time for knitting . . very little . . but while I’m waiting for water to boil or waiting for the canner to do its thing, I sit and knit.