Vince is such a non-funny guy that he’s funny.  But before we talk about Vince, let’s talk about Chris.  I’ve never been around folks who were really shy and I think Chris is really shy.  He’s been working around here for about a year and a half . . not non-stop, for which my budget is happy . . but at least once a month we have him out here doing something.  He’s just now getting to where he seems comfortable and will joke just a little.

We’re still working on getting lines to the water tank and where the hot tub will be and adding electricity to the second chicken coop.  They’re demanding fans out there because the red chickens have fans. 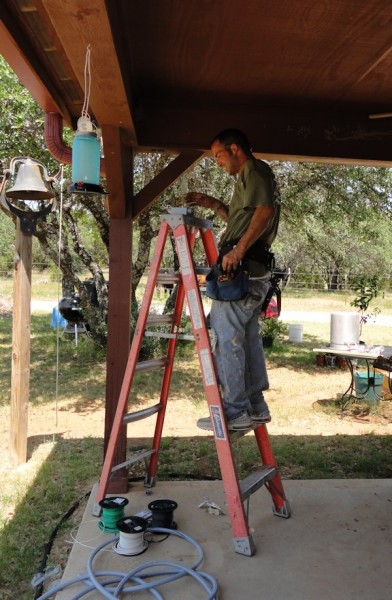 Vince loves finding things for Chris to do.  I think Vince sometimes forgets that we’re paying dearly for Saturday and Sunday work.  He’ll get the bill in a week or so and then we won’t have Chris back out here for a few weeks.

What he’s working on in this picture is the electric plugs on the porch were not GFI and they’re way too high so we’re bringing them down on those posts and making them GFI.  Once he finishes that, he’s going to put up the XM/Sirius antenna outside (because it won’t work inside . . walls are too thick and the metal roof) and run some plug-ins for the antenna.

Vince came in and we had this conversation:

About the only thing to see really would be Vince stripping by the back door and . . well, I don’t think I need a surveillance system to see that!  🙂