Let me start off by saying this:  I’m not asking for your opinion.  I already know . . you’re going to think I’m totally nuts when you see the backing I’ve chosen.  I can explain . . maybe!  It’s one of those things that seems right in my head . . today.  Tomorrow I’ll probably second guess my decision.  It’s done!  The backing is loaded on the longarm.  I am not changing it.

You’ll remember how much I struggled to choose the right fabrics because I wanted this quilt to be absolutely beautiful for my friend.  This is top (as if anyone doesn’t know exactly what this top looks like . . you’ve seen it 100 times in the last week!): 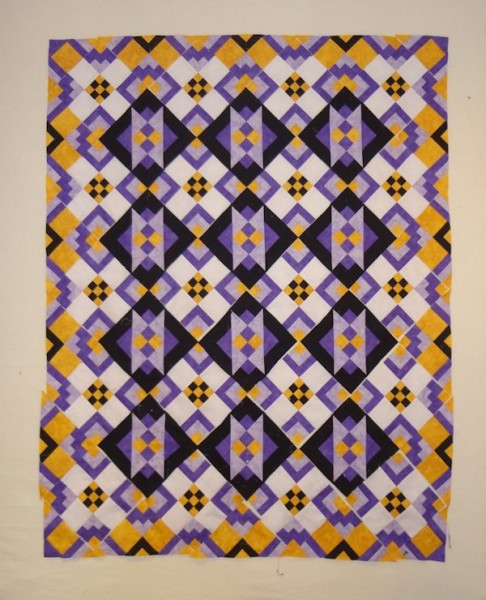 Road to Llano for a Friend

The first potential backing fabric I pulled would have worked nicely.  There’s only 3 yards because I used part of this fabric for the vet tech’s baby quilt.  I was going to add lavender or yellow to make it bigger.  It’s very pretty . . very feminine, right? The colors are soft and . . well, it’s just pretty!

But . . this is what I chose for the backing!

When you’re done laughing, we’ll continue our discussion!  You are laughing, aren’t you?  There’s nothing pretty about this fabric!

I was raised in southwest Louisiana, which isn’t exactly the heart of cajun country, though now it’s more “cajun-y” than it was when I was a kid.  But, I am not cajun.  My family came from north Louisiana.  My friend who is getting this quilt is 100% cajun.  Her parents were cajun.  She’s very proud of her Louisiana cajun heritage, as she should be.  She would never say it but she will probably love the back side more than she loves the front side!  When I came across this piece of fabric, I immediately knew this was the right backing.

Even though it wasn’t planned to be so, I think the quilt is going to be perceived to be an LSU quilt with all the purple and gold and then with this Louisiana food on the back, I can’t help but believe she’s going to love it!