Yesterday we left fairly early for a day in Abilene.  We had a couple of stops to make before Vince had a doctor’s appointment.  I laughed when I looked down at our cart. 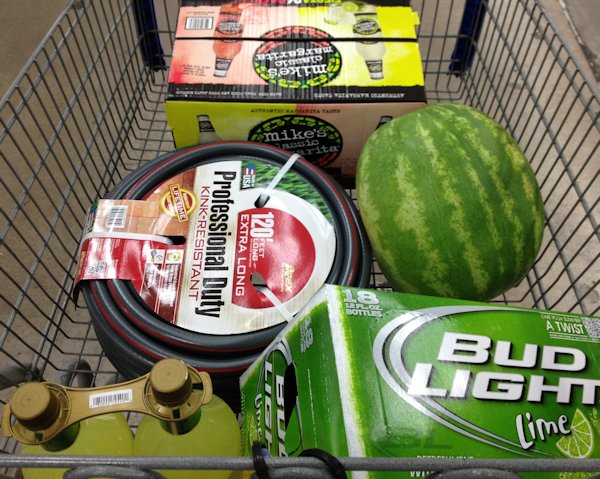 Let’s see .. there’s a case of Bud Light with lime, there are two bottles of margarita mix, a case of already made margaritas, a watermelon and a water hose!  Looks like neither of us will be thirsty!   🙂

Vince had told me that I could pick where we ate lunch.  That doesn’t happen often.  I searched through the Abilene restaurants and found a place I thought might work.  I sent Vince the link to it and he said it was ok.   We got there and it didn’t look too good.  I told Vince . . I’m not sure.  He said “let’s go in and look at the menu and if you don’t want to stay, we won’t.”  We walked in and walked out.  Oh, my . . what a dump.

From there we, went to a Chinese restaurant that was packed.  Didn’t have a buffet, which was a good sign.  The food was delicious. Service was great.  As much as I dislike Chinese buffet type restaurants, I love good Chinese food that’s ordered from a menu.  I think we’ll go back there . . especially since we haven’t had good luck with our restaurant choices in Abilene.

Vince had a doctor’s appointment that lasted forever and in the end, he’s going to have to have some minor surgery but it will have to be done in the hospital in Abilene.   Not exactly what we wanted to hear but it is minor so don’t worry.

While I was sitting in the waiting room at the doctor’s office for several hours, I was knitting on my Camp Loopy 3S Shawl.  There was a little girl there with her grandpa.  She was 4 and she was quite a talker.  She kept edging over closer to me and he kept getting her back but eventually, she made her way over to me.  She wanted to see what was in my knitting bag so I showed her everything.  Then she decided she would sit in the chair next to me . . on her knees right over my project I was trying to knit.  Her head was mostly between my project and my head!  Then she decided knitting looked easy and she wanted to try.  No . . I don’t think so!

She examined a couple of cuts and scrapes on my hands and wanted to know exactly how they happened and if they hurt.  No . . they don’t hurt!

She wanted to know when’s my birthday.  I told her and she told me that she and her mom were going to come to my house and bring me a cake!  OK!  I’ll be waiting!   🙂

They called her back to see the doctor and I kinda hated to see her go.  She was a funny little girl.

There was a grandma there with her daughter and granddaughter. She’s a knitter so she came over and talked to me a while.  By the time I got home from Abilene, she had found me on Ravelry and sent me a couple of links to some sites she likes.

No sewing yesterday but look out today . . I hope to get a lot accomplished.