Dinner in the crockpot was perfect!  Vince loved it. 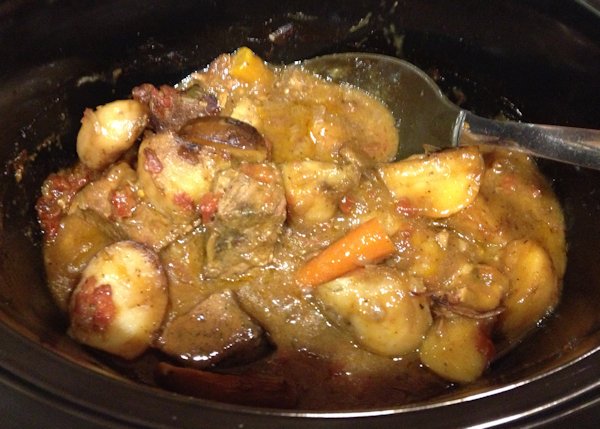 The meat was a thick round steak.  The gravy was thick, not watery or runny.  The potatoes and carrots were done but not mushy.  The Rotel tomatoes gave it just a bit of spice.  I had planned to put a jalapeno pepper in there but since I used the Rotel, I didn’t.  Vince said he’d definitely eat this again.

It could have been just my lucky day but I doubt that.  I think seasoning the meat and browning it before putting it in the crockpot definitely made a difference.  Also, a reader suggested that the newer crockpots may take only 5 hours instead of 7.  I put the food in at about 10 a.m. and checked it about 2:45 p.m., which was 4 hours, 45 minutes.  The meat was tender and the potatoes were done so I flipped the switch over to warm and left it til we ate about 5:30.  I’m going to plan from now on to have things cook in 5 hours . . on low.

I’m feeling adventurous.  I might cook chicken in the crockpot tomorrow.

The best part of the “meal” was that the neighbor made a banana cream pie and invited us over.  She had asked us yesterday if we wanted to come over after dinner for pie and, of course, we said yes.  She’s the best baker I know!  Here’s how you know when you have the perfect neighbor!  She got ready to cut the pie and she said “I don’t want any leftovers so we’ll just cut the pie in quarters, each eat a quarter and it will be gone!”  Doesn’t get any better than that, huh?  Actually, we had just finished eating so I could only eat half of the quarter and I don’t think everyone ate a whole quarter so they ended up with leftovers anyway.

We’ve never lived where we visited neighbors.  Vince wants to go over there almost every evening just to see what they’re doing.  We don’t go that often but it’s so nice to have good neighbors and even nicer to have one who loves to bake!  🙂