We finished putting together the machine and table yesterday morning.  By the time I got everything vacuumed and got the boxes of yarn and “stuff” back under the machine, it was late afternoon before I got a quilt loaded.  I procrastinate when I’m apprehensive about doing something and I was definitely apprehensive about using this machine for the first time.

My previous machine was a 2004 Millennium and I bought it new so I was real comfortable with it.  It was the smoothest machine and since the day Shirley bought it, I have second guessed myself and wondered if I made the right decision by selling it and getting a different machine.  What if for some reason I don’t love the new machine like I loved the old machine?

The very first thing I noticed was that on my previous Millennium, there’s a glued on tape measure across the back rail that runs the entire 12′ of the table.  That is not on the new machine.  The Bliss system requires a different setup for the table so there’s no flat spot for the tape measure.  I’m not even sure if they still put the tape measures on the regular tables but I surely did find that convenient for measuring backing, batting, and other large items.  I’ll get over that but it surely was convenient.

On my previous Millennium, the light is a skinny florescent tube, and it sits right below the front handles.  The light on the new machine is a cluster of LED lights and is much brighter and doesn’t block your view of the needle and quilting at all.  The LED cluster light was new on the machines several years ago and I’ve always wished I had that.

There is also a black light on this one.

The black light is so helpful when doing very tight closeup work and the thread perfectly matches the quilt top. 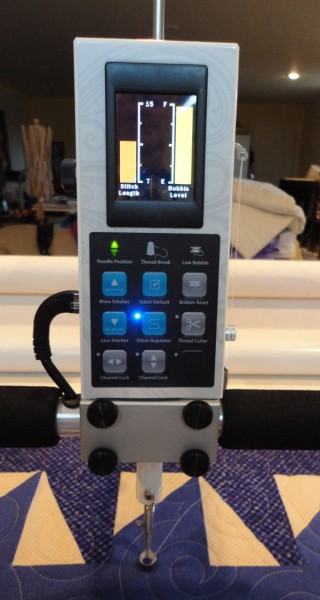 The touch pad front panel replaces the mushroom handles that were on the older models.  Here I can increase or decrease the stitch length, , switch back and forth from regulated to non-regulated stitching, lock the channel locks vertically or horizontally (or both to keep the machine from moving at all) and clip the bobbin thread.  This same panel is on the front and back of the machine.

The bar graph is new.  The left (orange) side tells me my stitches per inch and the right side, which is actually greenish, tells me the approximately usage left on my bobbin.

The previous models had mushroom handles with four buttons on the left and four buttons on the right handles, along with  a “clutch” on each.  Heck, I can’t even remember what all the buttons did but one made a one stitch, one was stop, one was horizontal channel lock, one was vertical channel lock, one clipped the bobbin thread.  The new handles are quite simple.  At first, I was certain that the new handles were not nearly as efficient as were the old handles but after using the machine less than an hour, I LOVE the new handles.

There were two options that I struggled with.  First was whether or not to get the Bliss Drive System.  I could not imagine that a machine could run more smoothly than did my previous machine.  I’ve used it on demo machines but every machine feels different and I didn’t have a real clue how it would feel when set up on my own machine and in my own room.  When checking with friends, some felt Bliss made the machine too loose and hard to control, some loved it.  I took a chance and got it and I would never have believed the difference it makes.  The machine doesn’t seem to me to be hard to control and it truly floats!

The other decision I struggled with was bobbin size.  For so many years non-APQS users have wondered why APQS didn’t use the larger “M” bobbins.  Several years ago APQS offered either the larger or the smaller “L” “Smart Bobbin”.  When I placed the order for my machine, I placed it with the larger bobbin but the more I thought about it, I realized I’ve always had such perfect tension and whether it’s due in any part to the “L” sized Smart Bobbin, I didn’t want to take any chances and changed my order to the smaller bobbin.  I’m fine with the amount of bobbin changes I have to make and I’m thrilled with the tension on the new machine.

Except for having a rather large credit card bill this month, I’m 100% thrilled with my new machine!