We use cedar mulch in the garden.  Why cedar?  Because we have a zillion (or maybe two zillion) cedar trees here.  They’re terrible trees for our area because they suck up so much water . . and water is one thing we don’t have to spare.  They will choke out every other kind of tree because they take all the water so they’re a nuisance tree here.  They spring up overnight and are 6 feet tall within a week . . or so it seems.  It’s a constant battle to keep them out of our woods.  Vince will let them grow til their just big enough to chip and then we put them through the chipper and make mulch.  We let a few of them grow between us and the highway because they help with noise abatement. 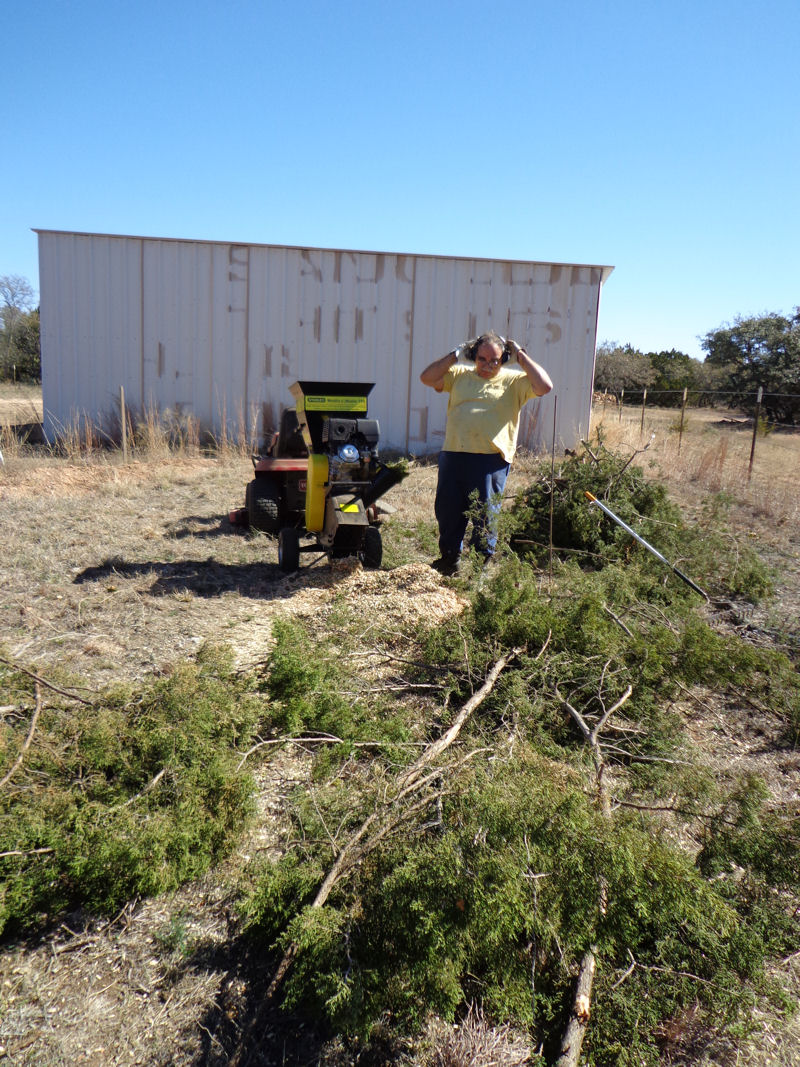 Every now and then you’ll hear that cedar mulch isn’t good for the garden but I think that’s mostly because, since it has insect repelling qualities (i.e., cedar lined closets), some folks assume there’s some pesticide in the wood.  There is not.  This article is a good one, as is this one.

We like to use mulch that has composted for at least a few months.  We never add fresh mulch to the garden plants.

Not only is cedar mulch free for us, but it lasts a very long time.

Peppers, on the other hand, like a more alkaline soil so they will not get mulched with cedar.  I will test the pH before planting the peppers and will try to get the pH above 6.0 . . maybe 6.4 for them.  I can either add lime or, if the material in my compost bin is read, I will mix it in with the soil for the peppers.  Good quality composted material is great for peppers, and I will mulch them with composted leaf mulch. Peppers need fertilizer that has twice as much potassium and phosphate as nitrogen so while I was using 5-1-1 (which has 5 times as much nitrogen as it has potassium and phosphate) when planting the tomatoes, I will use something like 4-8-8, which will basically be labeled as “Azalea Fertilizer” in most garden centers.

Adding cedar mulch can result in the plants needing a bit more nitrogen than they would otherwise so that’s why I added the fish fertilizer, which is 5-1-1.   Also, one sign of nitrogen deficiency is a yellowing of the lower leaves and the plants I had in pots were all indicating they were low on nitrogen.  Two or three days after planting, I will fertilize them once with 15-30-15 . . something with a high phosphate number.  I only use the 5-1-1 on the day I plant the tomatoes, and I only use the 15-30-15 a few days after planting.  All additional fertilizer will be something with a lower nitrogen, like 5-10-10.

Can you tell that I love chemistry and I love how tweaking those numbers for the NPK in the fertilizer can make such a difference.  Even though organic fertilizers are great, nothing beats having good, rich soil in the garden and we are so lucky to have that.  Also, adding compost is far better in most instances than adding fertilizer so I’m working that compost bin and hoping for a bountiful crop of produce soon.