Some of you may think having chickens is a simple task — provide a cute chicken coop, plenty of food and fresh water, tell them bed time stories each night, duck tape their wounds, gather eggs . . but there’s much more to it than that!

I find myself often playing referee when there are brawls in the chicken yard.  Usually they can be convinced to play together nicely . . unless one hen wants the favorite nest and the other hen has already claimed it as her own laying box.

This morning while minding my own business, thankful for some quiet time to think and ponder some events of the weekend, I was in the sewing room with the door closed and my music on and I kept hearing squawking.  I knew exactly what was wrong.   Miss Hattie and Sally have been laying their eggs in the gravel near the shop so Vince took a cardboard box and put shavings in it to make them a nice, soft spot for their eggs but no . . they have no interest in laying in there.  We even put an egg in there to show them what the box is for.

I went out and found that Sally was sitting in the box with wood shavings, and even though Miss Hattie has never once used that box, she didn’t want Sally in there and Miss Hattie was making the biggest commotion.  I went back to get the camera and apparently she thought I had gone to get the stew pot because she calmed down but I was able to get a bit of her tantrum on the video.

In the video, Miss Hattie is between the lawn mower and the RTV.  You can hear the roosters in the background.  I think they’re all saying “We’re so glad we don’t have to worry about all that egg laying business!”

After all that fussing, look where the eggs ended up!  Not in the box with the shavings.  Miss Hattie had no intention of getting in the box but she also didn’t want Sally in there. 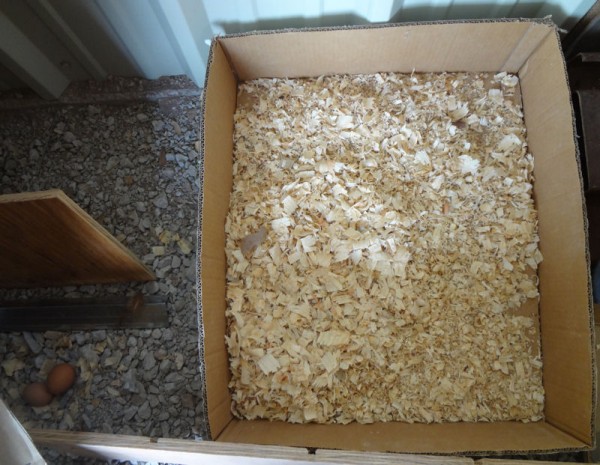 Raising good, well adjusted chickens, who can get along with each other and share  is no easy task!