So, the story began  . . back in March we bought 8 little pullets.  They were all supposed to be girls . . grow up to be hens and lay us some nice big eggs!

One of those little pullets, Bertha, always looked different.  She grew and she grew, and then one day, back in early June, she crowed.  She was a rooster.  She was huge!  We didn’t want a rooster but having one couldn’t be too bad.  The hens are real small.  Egg producing chickens are way smaller than chickens meant to be meat birds.

Week before last, Bertha decided to do what roosters do with hens.  He hurt two of them grabbing  them by their necks with his beak and throwing them on the ground.  That rooster definitely didn’t know how to treat his ladies!

Vince and I talked and we didn’t want any baby chicks from the Red Stars or the Production Red hens which were out there with Bertha.  So, why did we need a rooster?  Besides, I wanted chickens for eggs but also for pets.  I was constantly having to watch to see where Bertha was and I hated going into the run when Vince wasn’t outside just in case Bertha got after me and I needed help.

Thursday when I went out to give the chickens water in the run, he ran up to me and tried to scare me.  I am scared of him but I knew not to turn my back to run so I yelled at him and stood my ground and he walked away.

Friday morning I was out working in the garden and I heard a chicken squawking and realized Bertha had her down and he’d made her neck bleed so Vince and I decided it was time for Bertha to go.  Vince checked with everyone at work to see if anyone wanted a rooster.  Nope, everyone had more than they wanted.  I asked my neighbor if she knew anyone and she called a friend or two and no one wanted a rooster.

Friday evening we discussed our options and decided we had to do what we had to do.  In Missouri, we had a mean chicken and she kept pecking on the other chickens and causing chaos in the coop but one night, she grabbed my ear as I had my head in the coop talking with Ruby and that was the end of Lynn!  Chad cleaned her and she stayed in the freezer for a year.  I would have a little talk with myself and decide I was going to be a big girl and cook Lynn.  I’d take her out of the freezer, get all squeamish, put her back in the freezer and after a year or so, she was freezer burned and got tossed.

This morning, first thing . . right after Vince inspected the spider bite on my leg . . the spider bite that happened Thursday night in bed (told you that was coming), we had this talk:

Vince:  Are you going to cook him?

Me:  I don’t know if I can.  I could say yes but in all honestly, all I can be sure about is that I’ll try.

Vince:  IF you cook him, can you eat him?

(We were really making progress with that conversation!)

Then Vince was kinda getting huffy with me and he said “YOU wanted to live on a farm . . YOU need to learn to do this!”

Hmmm . . that sounded like a challenge if I ever heard it.  My grandma would go out to the chicken yard, grab a chicken, kill it, clean it and we’d have it for dinner.  I don’t think I got those genes!

I told Vince I would do my best but I didn’t want to see any part of it.  In fact, I gave him a freezer bag and asked him to put the chicken in there and put it in the freezer.  He had read on the internet what to do and part of what he needed to do was soak the cleaned chicken in ice water for 20 or 30 minutes.  Where do you think that happened?   In the kitchen!

I said to myself . . I’m going to do this no matter what!  I’m going to prove to him that I can.  I’m just that hard headed. 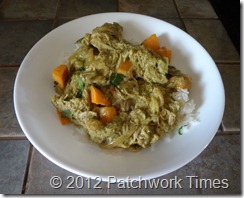 Dinner!  Chicken!  Bertha!  I did it.  I cooked it.  I ate it.  I wouldn’t let myself think about it while eating.  If I think about it even now, I might need to run to the bathroom!  I’ll get over it.

It was good!  It was very good!

Roosters are normally tough but since this was a fairly young rooster, I wasn’t sure but I went ahead and put him in the pressure cooker with some seasonings.  He wasn’t tough at all.  And, 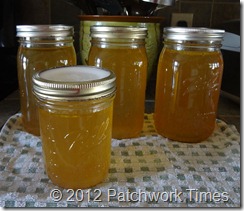 I ended up with 3 quarts and 1 pint of very nice looking broth.  Bertha Broth is how I labeled the jars.

I wasn’t sure how Vince was going to feel about doing his part of getting the chicken to the table but he was fine with it and we’ve decided that next year, we’re going to buy some meat birds and raise them with the intention of being food.  They won’t have names . . we won’t hold them and tell them bedtime stories . . this might all be a little too much too soon but for now, at least I did what I had to do and Vince even said he was proud of me.  I feel like I’ve jumped a big hurdle and am one step closer to being a real pioneer wife!