I’m wondering if I’ll ever get used to the bugs and critters around here.  I grew up in southwest Louisiana so it isn’t like I haven’t lived with bugs but the creatures around here . . they’re huge and they scare me.

Monday night when I got in the shower, without my glasses, I reached for my little bath scrubby – those ball things made out of net.  Mine is blue.  I saw something brown in it.  I figured it was mud because sometimes, I do have mud on me when I get in the shower.  Thankfully I decided to pick it up and look at it a little better and it was a scorpion.  Can you imagine if I’d started scrubbing myself and that thing had stung me?

The next night I went into the bathroom and happened to look up and there was a centipede on the ceiling.  Vince was asleep.  I wanted to wake him up and tell him I was moving to some place more civilized  ask him to come kill it but decided to be a brave little Texan and kill it my own self. 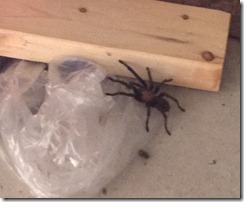 The next evening (yes, this all happened three days in a row and I’m still here!) I went out to the sewing room to get something.  As I was leaving, I opened the door, looked down and saw this!  OMG!  I’m not sure if you get the idea in this picture how big this thing is but it is HUGE!  I knew Vince was outside but I wasn’t sure where so I calmly yelled “VINCE!  Come to the sewing room!”  He heard me and said “What’s wrong?”  I said “PLEASE COME TO THE SEWING ROOM!”

He came.  He said he had never seen a tarantula so big.  He didn’t even think we had them here.  Oh, yes, dear!  Anything big and scary and deadly . . they have them here! And I think they’ve all moved to the Yellow Jacket Ranch.  And besides that . . everything is bigger in Texas.  Maybe we should change the name of the ranch to “The Bug Killer Ranch”.  Maybe all the critters have gotten the idea that because we’re named “Yellow Jacket Ranch”, that we love bugs.  No!  We do NOT!

Where is safe?  Not in my shower, not in my bathroom, not in my sewing room.  Every night I turn the covers back on the bed, I look way down at the foot of the bed to make sure there’s nothing under there.  I look under my pillow, I look inside my pillowcase.  And even then, I know that some night, there’s going to be a critter in the bed with me and then . . I’ll no longer be a Texan!