The back vent opening in the chicken coop in MO was either higher on the coop or the roosts were lower but the chickens there couldn’t look out. 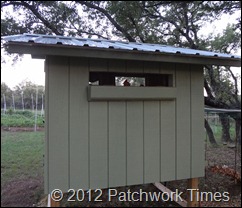 Can you see the little heads sticking up?  I walk out the door early in the morning to let them out, I look over their way and they’re watching for me.  We put them up at night and they hop right up on the highest roost and they’re looking out the vent opening, watching us.  Sometimes we sneak around to the front of the coop and they don’t hear us so we crack up seeing them all facing the back of the coop.  They’re looking for us and we’re watching them from the front.  Nope, doesn’t take much to entertain us. 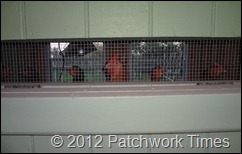 See Burt there in the middle.  He’s the big one . . the rooster.  He crowed that one morning and then went for days without crowing again but now he’s crowing every morning . . only til I get out there to let them out.  Once he’s out in the yard, I haven’t heard him crowing any more. 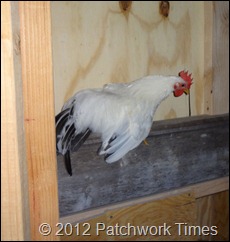 It’s quite different with my little rooster, Roscoe.  He has a temper and he definitely loves to crow.  He crows from about 5:30 a.m. til at least 10 a.m.  So far he isn’t very loud so he doesn’t bother us. We do think he’s going to be a chicken politician as he loves to hear himself crow!  Here he was already on the board where he likes to sleep, on the second floor of the coop, and I decided to pet him.   I’m not his favorite person and he did get quite vocal and angry with me.  Vince was on the other side of the house watering the fig trees and he came over to see what all the squawking was about.  Roscoe was ready for bed and didn’t appreciate me being out there. 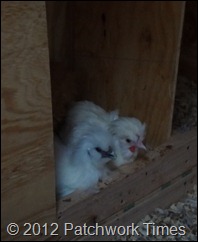 While Roscoe is sleeping on the second floor all by himself, the other four bantams are crammed into one egg box sleeping right next to each other.  The other two are in there but all we can see are Thelma and Otis.  A friend pointed out to me last night that Otis is a Sultan instead of a Silkie.  I’m glad to know that there’s a reason why he looks so funny.  Poor guy.  He’s such a sweet chicken but he surely isn’t going to win any beauty contests. 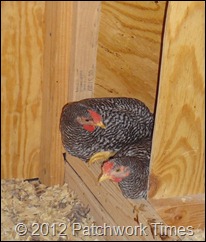 There are 6 of these . . 3 roosters and 3 hens.  At least one of the roosters is going to have to go.  We may move one over to the other coop where now there are 13 hens and 1 rooster.  For now, all 6 of them sleep in one egg box.  They’re almost full size now and it has to be hot and crowded in that one egg box.  There are two roosts . . one downstairs and one upstairs, and why they’re not sleeping on those, I don’t know.

Chickens are funny.  We have so much fun watching them and apparently, at the least the ones in the big coop are having fun watching us.