Is there any place in the entire State of Texas where it’s safe to go barefooted?  I know not to even think about going outside with no shoes – sand spurs or cockle burs . . whatever you call them . . they hurt bad!

We don’t wear shoes in the house or in the sewing room so I know we’re not tracking them in and Speck . . if he even thinks he’s stepped on one, he just falls out on the ground with his paw sticking straight out waiting for help so I know he didn’t bring them in. 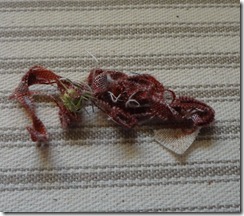 Saturday I spent the entire afternoon in the sewing room and stepped on two of the burs.  Later that evening, I thought I had stepped on another one and couldn’t find it because it was camouflaged in some fabric pieces.

Then Sunday,  I felt it again and decided to find it and sure enough . . it was the third one I’d found in the sewing room in two days. 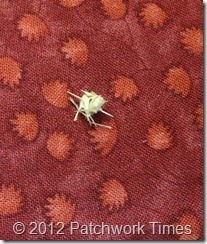 Then later on  Sunday evening, I stepped on a fourth one stuck in a rug in the house!

And besides the cockle burs, there’s stinging weeds in the garden.  I thought I knew what stinging nettle looks like and I don’t think it’s that but the first two times it happened, I was pulling weeds and thought a bee had stung me.  I keep an epi-pen with me and waited to see if I needed it but I was fine.  Then over the weekend, I pulled one weed and the same thing happened again so it has to be a weed. 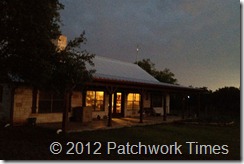 Just about the time I start wondering why anyone would live here, I see my house and remember how much I love our land and our house and our garden and our chickens and that makes me almost love the cockleburs and the stinging weeds.  Almost!

If you’re wondering about the boxes on my porch . . the boxes that have been sitting there for months . . yep, I’m wondering about them too.  One is a picnic table that’s only been there a few weeks.  The other one . . the bigger one . . that’s patio furniture and it’s been there for at least three months.  I dare not ask . . Vince has been busy, but I surely would like to be using that furniture!