About every other Friday night we go out for fried catfish.  Vince’s favorite place so far is about 23 miles south of here.  That’s my least favorite place.  We’ve been to one places that was just terrible – fish wasn’t so bad but the atmosphere was bad.  Crowded and there was no real non-smoking section. 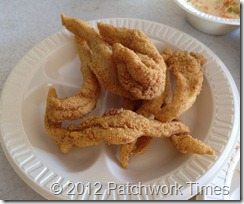 Last night we drove close to 50 miles one way to Cook’s Fish Barn out from Comanche.  Except for the 100 mile round trip, this was easily my very favorite of all the places we’ve tried.  The fish was excellent, the people working there were really nice and friendly.

The restaurant is located in an old chicken house.  They had an old timey country band playing.

We took one route to get there and another route to get back.  I kept asking Vince to stop so I could take pictures.  He was beginning to worry that we would never get home but he wasn’t nearly as worried as I was  .. because he insisted we stop at Wal-Mart.   How can someone who loves to shop as much as he loves to shop live with a non-shopper like me?