Remember Big Bertha, our huge hen?  We thought she might have been a he when we first got them.  She was a lot bigger than the other little chicks.  The more we read about the variety we thought we had, the more we thought Bertha might have been a rooster but after the little black roosters and the little Bantam roosters, who were about 3 or 4 weeks younger  than the first batch of chickens began crowing over a month ago, we assumed Bertha was a hen. 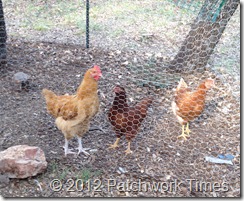 See how much bigger she is than the other chickens?

Yesterday morning just as it was getting daylight, I staggered outside to let the chickens out.  It was halfway dark, I was halfway asleep and the cicadas were so darned noisy, I couldn’t hear myself think.  Just as I got to the big girls’ coop, I thought I heard a crow.  There are 14 hens in that coop . . no roosters!  Couldn’t have been a crow.  I decided I just wasn’t awake enough, the cicadas were so loud that it was coming from the Dominique/Bantam coop.  The chickens were let out, and I set about working in the garden.

In just a few minutes, I heard the loudest crow!  There was no way that was coming from the far coop with the Dominiques/Bantams.  I looked and there stood Bertha . . proud as could be . . standing on the ramp crowing her his little heart out.  Those other 13 chickens were scared to death!  They were jumping and flying into the fence and in a general panic.  Bertha stood up there and crowed and crowed.

The other chickens must have figured out the noise was coming from one of their own because they quickly calmed down.  I didn’t hear any more crowing the rest of the day.  He must’ve worn himself out.

This messed up my elaborate plan of moving some of the roosters here and some there, and moving a hen from this coop to that coop.  I need to spread some of the Dominique roosters around but with Big Bertha being large and in charge in Hen House #1, I don’t think I need to try to put another rooster in there.  I’m afraid we’re going to have to find a new home for one Dominique rooster and one Bantam rooster.

Who would have thought Bertha would wait til she was over 3 months old before she’d start crowing!