The log cabin QOV is not going to get finished today.  It has three plain borders.  Why did I think there was only one?  The 25 patches are all done and are attached so maybe tomorrow I’ll get all the plain borders on! 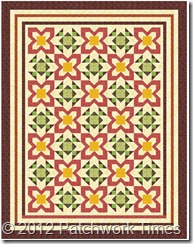 Chad and Nicole got a new sofa this weekend and I asked Nicole if she wanted a quilt to use on the sofa.  The sofa is a very pretty tan – solid tan.  I had this design in my “waiting” files.  Nicole isn’t as much into bright colors as I am and she said she would like something with a little “coral” in it.  I have some Minkee type fabric so I thought I’d use that for the backing and then I figured since the baby’s owl quilt will have Minkee on the back, that would leave only Chad without a Minkee backed quilt so I found this easy quilt in my files. 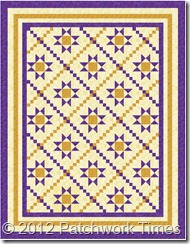 Chad would love something with purple and gold (LSU colors).  So, that’s two quilts I would like to get made today or tomorrow (or within the next month or so).  Nicole called and asked if I could make a queen size quilt.  They have Chad’s old double bed but she’s bringing her queen bed over from her mom’s because Chad’s bed really is worn out and she said her back is hurting from sleeping on it . . so they need a queen quilt. 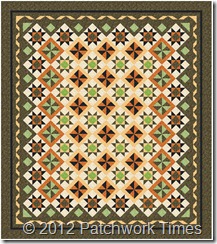 I said “Nicole!  You know I don’t do a good job with neutrals!” 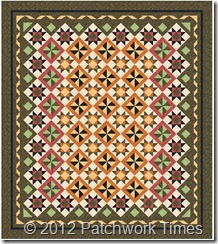 Here’s a version with a bit brighter colors.  I think I like this one better.  I’ll get Nicole to look and see what she thinks.

I see there are a couple of spots where I have pieces colored incorrectly.  Hopefully I’ll catch all those before I start sewing!