Alert:  There’s a gross picture farther down the page!

Back on February 3, I had surgery on my finger.  I’m sure you remember because I whined and complained about it for weeks months. I had a ganglion cyst.  It started probably back in 2008.  The doctor in Missouri wouldn’t touch it but wanted me to see a joint specialist in Springfield which was a couple of hours away and I just never took the time to go.   At some point, the cyst moved from the first joint in my middle finger, to just at the edge of the fingernail and then it caused my nail to be deformed.

Once we got here, I showed it to the doctor and he sent me to an orthopedic surgeon who happens to be here in town and I really like both those guys. 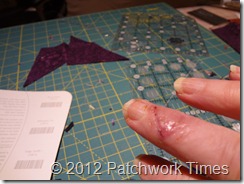 So, in February, I had surgery and they had to make a fairly big “V” shaped incision because the doctor didn’t want to cut straight across the joint.

The doctor told me there was a chance the cyst might return and within three weeks of the surgery, it was back but so far, it’s staying on the joint.  He also said that if it returns, there’s not much use in trying to remove it again.  So, I have it probably forever now but the good news is that the deformed fingernail has grown out.  The doctor wasn’t sure that removing the cyst would fix the nail because he said the nail bed might have been damaged. Four months and six days and if I cut the nail all the way back to where it grows out, the weird part would be gone!  My nail is close to normal again!

For me, that made the surgery worth it, even though the cyst is back but who would have thought it would take over four months for a nail to grow out from way back at the nail bed to where you could cut it?