Yesterday my friend, Doris, and I met our friend, Melinda, at the quilt show in Abilene.  I’ll tell you about the quilt show later . . in another post.  When I got home, I guess it was about 4 or 5 p.m., Vince said “Come see!” so I followed him out to the garden. 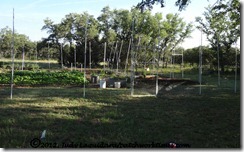 While I was gone, he had moved the fencing out.  If you see where the white buckets are, they had been just at the inside edge of the garden before, and he also brought it out the other direction.  He tilled up some of the soil.  I think he’s trying to work me to death with all that garden space!

I think the plan is that we’ll plant the blueberries where the newly tilled up soil is.  We have to condition the soil there to get it to be a bit more acidic for the blueberries.  I think the area to the right may be where I put the kitchen garden – lettuce, a couple of peppers, one or two cherry tomatoes, herbs . . the kind of things I can run in there and get since it’s closest to the gate, and not have to make my way through the whole garden to get things I need for dinner most every day. 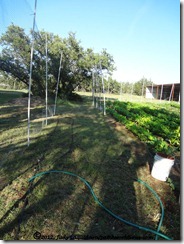 This area is probably where he will plant the grapevines and the raspberry plants.  The grapevines will work nicely in this long, narrow area. He’ll have to build some kind of trellis down the middle.

I guess once we get every square inch of the whole place planted, we can get some rest!