Those Loopy Ewe folks are so good at getting my money!  It’s not enough that they have some of the best yarns out there in all the colors I love but then they have contests and fun competition type things and Camp Loopy!  Do you remember Camp Loopy from last year?  If we completed projects for all three months, we got a free skein of Wollmeise . . the yarn that it’s almost impossible to get!

I wasn’t going to do it this year.  Between the garden, the yarn stash I already have, and so much else going on, I just wasn’t going to do it but you know who talked me into doing it.  The first project has to be something designed by someone who was born or lives in a country different from my own.  There are thousands of great projects from designers from other countries (as well as the U.S.) but some of my favorites are from Germany, Norway, Switzerland, Canada . . heck, I like them all.  The project has to use at least 400 yards and can’t be started til May 27 and has to be finished by June 27.  I began going through my Ravelry projects, queue, and favorites and there were so many I considered.  Here are the ones that made the semi-finals and actually got printed out. 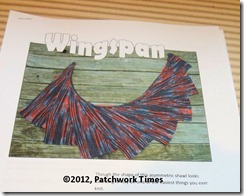 Wingspan is so popular right now.  The great striping yarns can really make this one an awesome little project. It looks so cute with a denim jacket for winter . . and I could get another pair of boots I’ve been wanting . . all after I get skinny.  I am going to make this one but it didn’t make the cut for Project 1.  I may make several of these because I think they would make some awfully cute gifts. 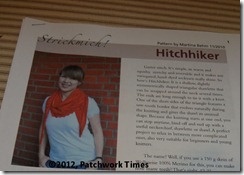 Hitchhiker is another one that’s pretty easy and is shown in a lot of project files on Ravelry.  I’m going to use Wollmeise for this and I’ll make one.  It’s another good one for my denim jacket.  Too bad we don’t get much winter.  This one is also a good one for gifts but it didn’t make the final cut either.

This is Pamuya.  I’ve wanted to make this for so long but even though the instructions say it can be made from one skein of Wollmeise, most everyone who has made it has needed some amount from a second skein.  This is where the challenge has come about – trying to get a second skein of the same color of Wollmeise.  I have that problem solved, thanks to a very generous blog reader.  More on that later.  This one did not make the final cut either . . simply because even though everyone who has made it says it isn’t hard, it looks kinda hard to me. 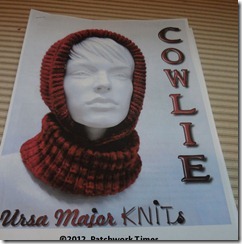 I love Cowlie and I’m going to make a bunch of these.  The great thing about this is it’s a cowl attached to a cap.  Take the cap off and it just hangs on the back of your neck and doesn’t get lost!   I can see Nicole needing one because who can keep up with your cap and a baby?  Chad needs one in hunter orange for wearing when deer hunting and he needs one in camo for duck hunting.  I need some too and Vince needs a couple!  It didn’t make the final cut simply because the pattern is about 15 pages long and looks a little intimidating but I think there are lots of great instructions and tips and it’s really not going to be hard. 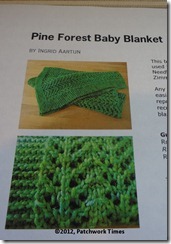 The pattern I chose for Project 1 is Pine Forest Baby Blanket.  Flat, easy knitting and you know a baby blanket is soon going to be needed!  The yarn I chose is Classy by Dream in Color and the color is Flamingo Pie.  If the baby is a boy, we’ll just have to save this one but Nicole loves orange enough that she can decide what to do with it.  It’s kinda peachy without being in your face orange but it’s also pink enough that it will definitely be not for a boy.

So, I’ll be doing Camp Loopy again this year and hoping I can keep up with the projects and my quilting commitments and the chores around here. Life is never boring at my house.