My mother is a tiny lady . . she’s always been little.  She’s not even 5′ tall and has probably never weighed over 90 pounds.  So, you can imagine how odd she looks with that one long arm! 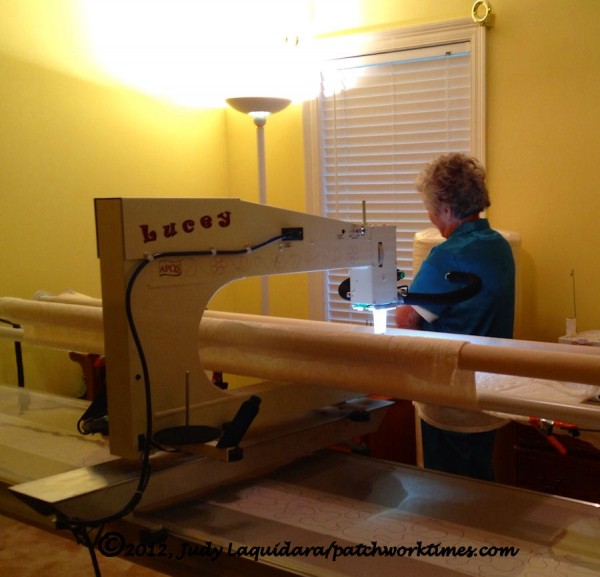 You can see she was being quite uncooperative about having her photo taken.  We both had our pajamas on while quilting and it was fairly late in the morning.

My parents decided a couple of months ago that they needed a longarm and ordered an APQS Lucey machine.  Mom and Dad did a great job of getting it all set up and had done several practice pieces.  They all looked way better than the first few pieces I had did as a new longarmer!  I think it’s fantastic that folks their age are doing something they want to do and not saying “we’re too old for that”!  I can remember when I was wanting a longarm and Vince said “Is this something you’re going to be wanting to do when you’re 60 years old?”  Hmm . . I’m almost there and the answer is still yes!

Because I’m a good daughter, I won’t tell you how old my Mom is but I will tell you that she was 20 when I was born and I’ll soon be 58.

Speck felt right at home with his pillow and quilt under Mom’s longarm.  It probably seemed kinda strange to him though that it was so clean under there.  It’s never clean under my machine  . . always “stuff” under there. 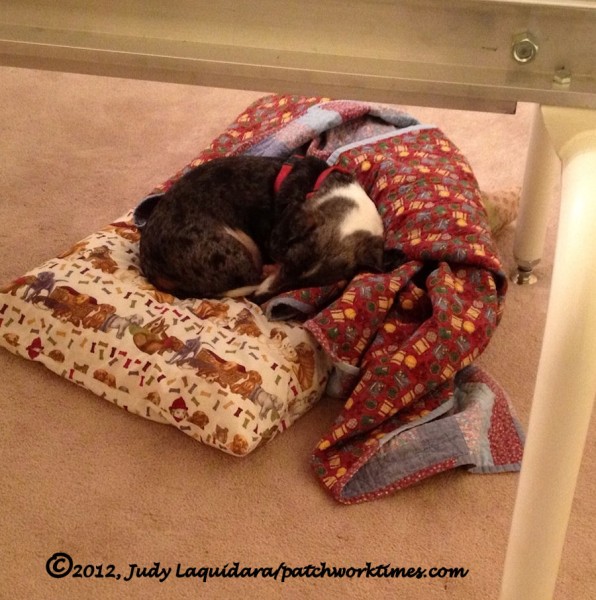 Sleeping under a quilting machine is something Speck has done since we brought him home when he was about 8 weeks old.  And, he’ll soon be 12 years old.  He’s surely seen lots of quilts get made.

I’m proud of my parents for getting themselves a longarm machine and for learning to use it.