We were out working in the yard.  Vince was doing something in the back and I was pulling weeds in the front.  He came around to the front and said “Get your camera and come see!”  I started with my 20 question routine . .

When I got to the back, Vince said he was walking by this pile of dirt and he noticed a hole that hadn’t been there.  I tell you . . I mostly think he doesn’t pay attention to details but I’m obviously wrong. 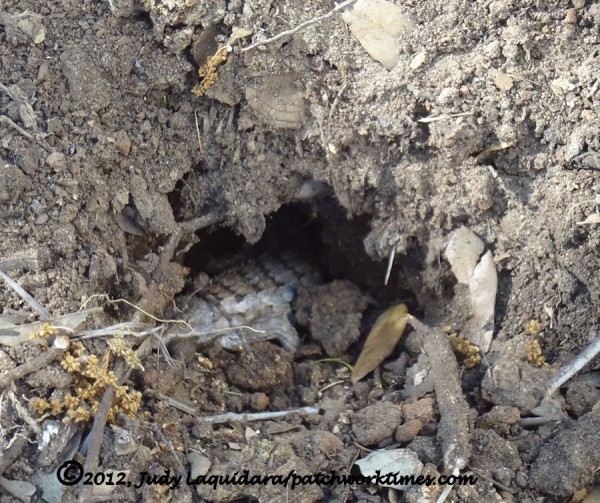 Vince said he squatted down to see what was in the hole and saw eyeballs looking back at him. 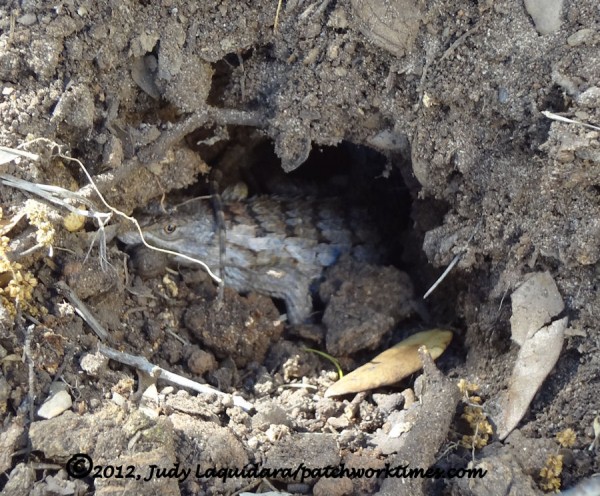 It’s some kind of a huge lizard . . I don’t think it’s a horned toad but I really don’t know.  It didn’t have any real “horns” on its head but it kinda has spines down its back.  It wasn’t real fat like horned toads (which really are lizards) but I think they puff up when they need to scare a predator and maybe she just didn’t feel that threatened.  We don’t look very scary, do we?  Maybe she thought we hadn’t seen her and she was trying to blend in with the dirt. 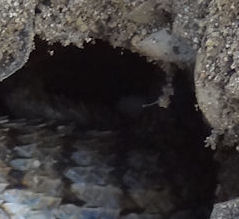 If you enlarge the picture (this is right back by the tail), there’s an egg!  There were several but I couldn’t see how many and I really didn’t want to disturb the critter.

After a while, we walked back past the dirt pile and he/she had completely covered the hole . . you’d never know it was there, and we saw him/her scurrying off towards the shop.  Great . . probably to move into my sewing room!  🙂

So, I’m wondering, did she lay eggs and she’s done and they’ll hatch on their own or did she just run out for a bite to eat and she covered the hole to keep us away, and she’ll come back and remove the dirt to get back in?  Sounds from this article like they do lay their eggs and then leave them alone to hatch and dig themselves out.

Don’t we see the neatest things!  What were the chances that Vince would happen by that dirt pile just when she had dug the hole and he would notice the hole and we would see the eggs and then we’d see that she had covered the hole and see her leaving at breakneck speed?  Now I want to know how many eggs she laid but I’m not going to disturb the nest.  I want to know how long it takes for them to hatch.  I want to see the baby lizards!