The coop is finished for all practical purposes.  It still needs some caulking, which might happen tomorrow, and then we will prime it and then paint it and maybe by the end of the week the first batch of chickens can be put in there.  With each picture, I’ll try to answer questions that readers have asked.  First, about the sick chicken.  She’s doing ok and she’s back with the other chickens but I still don’t think she’s right, though I don’t think she’s “sick”.  She’s real short and fat . . real fat!  When I pick her up, she almost feels like she has a growth or something.  She doesn’t feel like the other chickens but she doesn’t seem to be in distress.  She waddles instead of walking and sometimes the others run over her.  She’s a strange one.

The bantams are doing fine.  They’re so tiny and so cute.  We are going to keep them in a separate coop with a separate run and probably not put them together.

Someone asked in an earlier post about why the coop is off the ground.  Vince built both our coops off the ground like this so he can slide the wheel barrow under the door and rake the straw/shavings and droppings into the wheel barrow instead of having to scoop it up.  He lined the bottom of the floor with heavy duty vinyl so if we keep the straw or shavings on the floor, it’s very easy to rake them out once every 10 days to two weeks and keep the coop clean.

As far as the plans, Vince found several designs on the internet and combined and tweaked the designs and then did the math and figured it all out.  There are some plans available online for a very similar coop but since we didn’t use them, I can’t tell you how closely they compare to the coop we now have.  The inside of our coop ended up about 7′ x 9′.  We started at 5′ x 6′ and went to 6′ x 8′ but I believe the final measurement is 7′ x 9′.

As far as decorating the coop, I don’t think you folks realize how much we have going on right now.  I still have nails inside the house where the former owners had things hanging (I asked them to leave the nails) and I haven’t even unpacked our decorations so that tells you  how far down the road I am from worrying about decorating the chicken coop. 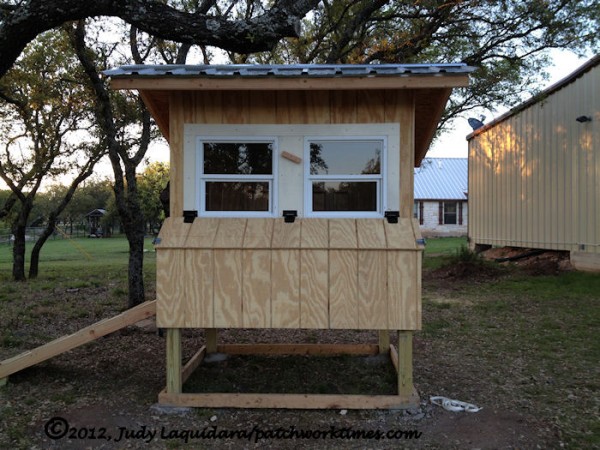 From the front – the windows still need the vinyl coated hardware cloth over them to keep bad critters from breaking the windows to get them.  See the hinges at the bottom of the windows?  That’s the egg door.  The nesting/egg laying boxes are underneath that.  I’ll simply lift that door and can use the latch between the windows if I need to prop it open, gather the eggs and close and latch that door back.  The human door is to the right and the chicken door, with the ramp, is to the left. 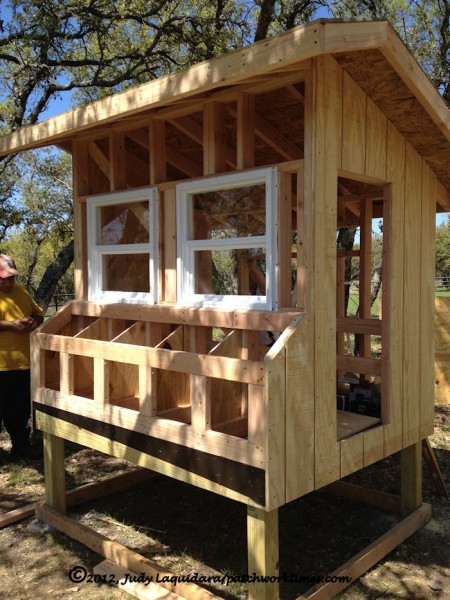 Above is a better shot of the nesting boxes before the coop was finished.  Four (on the right side) are nesting boxes and the one on the far left will be for the heater. 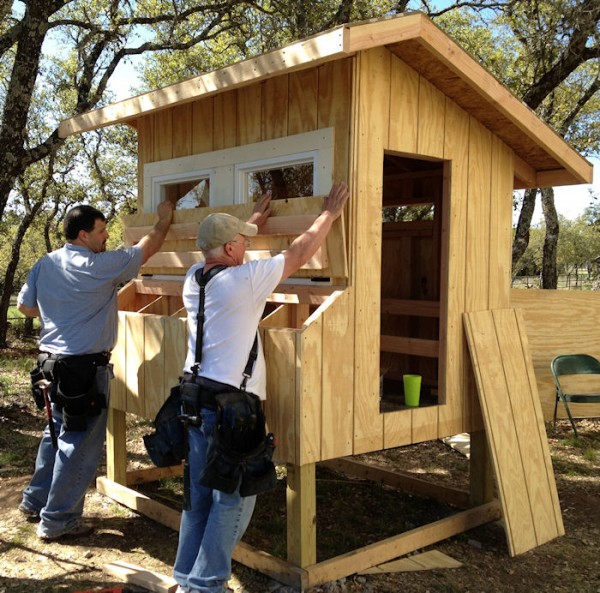 The above photo shows the egg door open and you can see inside a bit to see the two roosts. 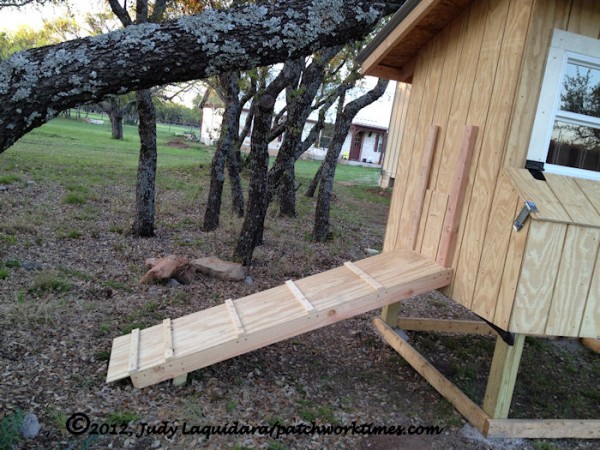 This is the little side door and ramp the chickens will use.  It will be closed at night once they all go into the coop and will be opened in the morning and kept open all day so they can come and go as they please.  The area on this side of the coop will be fenced for them to hopefully stay safe and have some tree cover to keep hawks from flying in and getting them. 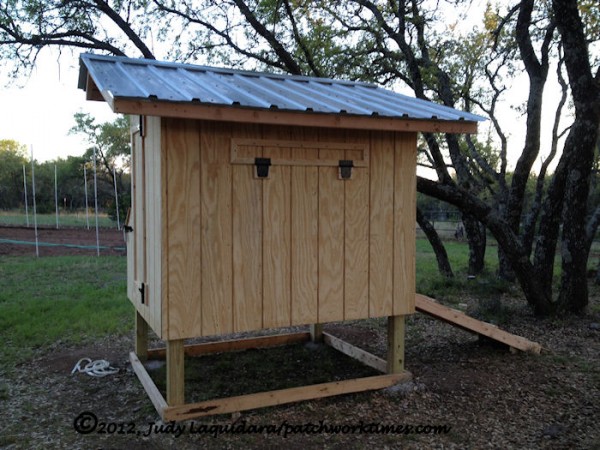 This is the back side of the coop.  There’s a drop down “vent” opening on this side.  It will be opened for cross-ventilation but can be closed when it’s cold.