Should we make guesses as to how long my plants will last? 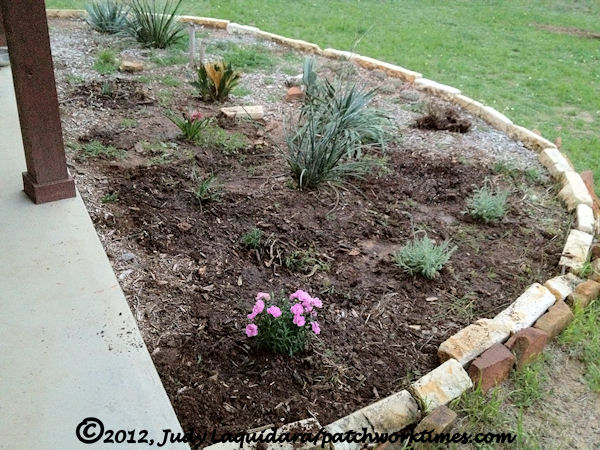 After a few years of living with drought conditions and fighting the deer, I may give up but for now, I have to be able to look out in the spring and see something blooming.  The previous owners had cactus and really not much of anything in this bed at the front of the house.  There is a hyacinth that just finished blooming.  Either the deer didn’t notice it or they don’t eat hyacinths.  There are some chives in there and some blue bonnets that are about to bloom so I tried to work around those.  Otherwise, the rest of the stuff can stay for now but probably not forever.  My rule is that if we don’t eat it or it doesn’t bloom, it doesn’t stay.

Yesterday I set out two rosemary plants, a dianthus and two lavender plants.  I have two more dianthus and two more lavender that I’ll set out in the morning.  I wish I had dug up some of my irises in MO and brought them with me but I didn’t.  Some of them had been with me since Louisiana and in Kentucky and then Missouri, but that’s where their trip ended. I probably won’t get more irises but they’re blooming around town and it made me miss mine.  They’re something else the deer don’t eat so . . maybe I will get more . . some day.

As soon as I get everything planted that I’m going to plant, we’ll get mulch and add it to this bed.  Lots of work to be done around here . .