This story could have a sad ending . . or maybe not.  I know now that we should have ordered our baby chickens from a hatchery but we didn’t.  We had no idea buying them here would be any different from buying them in Missouri.  There, almost every place in town had baby chicks . . all organized into different breeds . . straight runs or just pullets.  Here . . it seems to be anyone’s guess as to what kind of chicks are in the buckets and everyone  you ask at the store gives you a different answer.

Saturday we went into Tractor Supply and were talking to the guy working in the chicken department.  He told us they hadn’t gotten in any egg production pullets on the Tuesday before (that’s when we bought our chicks) . . the only pullets they had were Cornish Cross.  Those are meat birds!  They pretty much have to be butchered when they get to be 6 or 7 weeks old because they’ll get so big, their legs will break.  I would never have bought those chickens but we didn’t know.  We still don’t know.  Then we asked someone else and they said no . . they had gotten some mixed pullets but there could have been some Cornish Cross birds in there.   They’re growing so fast that I fear they are Cornish Cross.  And, no matter how much I handle them, they are not friendly.  They are scared to death of me.  I can see they are never going to be pet type chickens like my others were.  I suppose I didn’t buy them to be pets  . . maybe . . but I surely did enjoy spending time with the chickens in Missouri.

So, we decided we would get some more chickens just in case the first ones are Cornish Cross.  Yesterday was Tuesday so that meant a new shipment of baby chicks arriving at Tractor Supply.  I called and they said they had “production red” pullets.  I did a bit of research and decided those were close enough to what I had before.  I drove to town and the chicken guy told me that no . . the production reds were straight runs, not all pullets.  I didn’t want that.  They had assorted pullets . . meaning no one had a clue what kind of chickens there were.  There could be Cornish Cross chicks in there too.  So, I left without getting anything.

They did have the cutest bantam babies with these funny little “hats”.  They looked like someone had glued a pom-pom on their heads.  If they had been pullets, I would probably have bought some of them but the last thing I want are roosters of any kind.  After  work I was telling Vince about them and he said “Let’s go see them!”  So, we went back to town.  Would you believe that they probably had at least 100 of those little bantams that morning and by the time we got there, every one of them was gone!

We debated about whether we should buy more of those assorted pullets and decided to get 8 of the reddest ones and hope they were either Rhode Island Reds or red stars or something . . anything besides Cornish Cross. 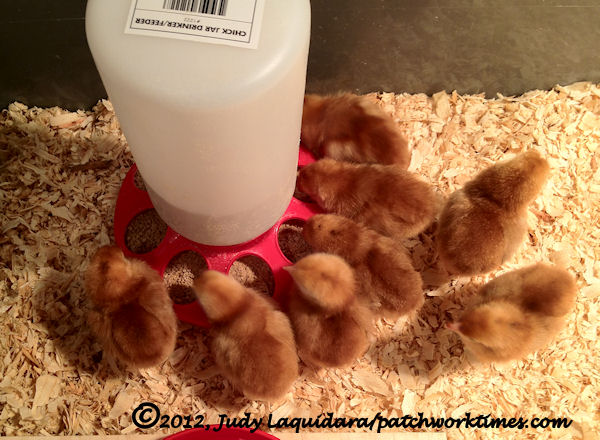 Just like all baby chicks, they are so darned cute!  These are very friendly.  They will eat out of my hand . . the others never would.  That gives me hope.  Vince said “What happens if next week they get in red star pullets?”  I guess we’ll end up with 24 chickens when we really only wanted 8.  Thank goodness we’re not living in the city!  🙂

Wish us luck!  I’ll be so heartbroken if we have to butcher our first 8 chickens but that’s life on a farm and we’ll deal with it if we have to.