For a few years I’ve wanted to try the Tattler canning lids.  They’re reusable .  . supposedly over and over!  They’re quite a bit more expensive than the traditional “use ’em once and toss ’em” lids. Three dozen Tattler lids with rubber rings is $29.95 so that’s about $10/dozen.  The regular disposable lids that we’ve used forever for canning run about $2.50/dozen.

What’s kept me from trying the Tattler lids was that my old lids always worked . . always!  I can’t remember the last time I had a jar that didn’t seal.  Part of me said “Why change something that’s working so perfectly?” but, on the other hand, I have several concerns about the throw away lids:

A month or so ago I ordered some of the Tattler lids to try.  Amy had brought heirloom tomatoes to the retreat and I brought home those that were leftover. 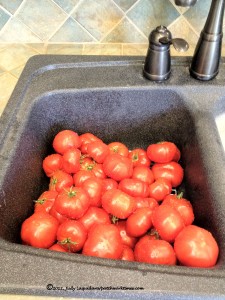 Even with the Tattler lids, I debated about whether or not to use them or the regular lids.  Trying something new isn’t always easy for me but I figured the best time to try them was when I had only a few jars and if, for some reason they didn’t seal, it would be better than if I were canning dozens of jars and they didn’t seal.

The Tattler lids worked great!  They were no harder or no easier to use than regular lids.  All five quarts sealed just fine.  In the photo below, you can see from the Tattler box, that the rubber rings/seals are separate from the lids.  The rubber seals are placed directly on top of the jar, once the top has been wiped completely clean, and then the lids are placed on top of the seals.  The seals are also re-usable and the reviews I read said they have been used dozens of times.  Replacement rings can be purchased and I did purchase some of those too. 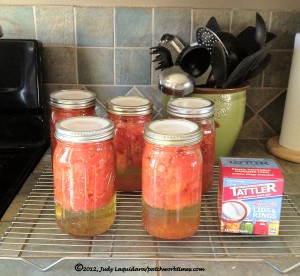 If I use the lids four times, that will make the cost equal to the cost of the throw away lids.  I’ve heard of folks using the lids over and over, dozens and dozens of times.  They come in wide mouth and regular size.  I mostly use the wide mouths so that’s all I ordered.

I’m very glad I tried them and think I’ll be using them from now on!