For the past three days I’ve been looking for the cows.  They belong to the neighbor but they sometimes visit us.  I knew there were four moms and four calves.  Every time I passed a window, I looked for them.  A dozen or more times each day I went out looking.  Hadn’t caught a glimpse of them.  Didn’t hear a mooooo . . nothing!  Vince came home at lunch and said “Did you see the cows?”  NO!  They were right out at the dge of our driveway.

I sure didn’t know girl cows had horns!  I’m sure there’s a whole lot more that I don’t know. 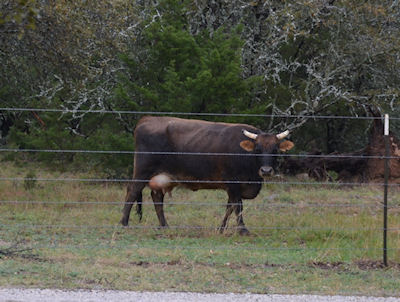 This one looked at us and I think she was saying . . bring it on if you’re brave enough to try it!  We didn’t!  I was joking . . no way am I going anywhere near those cows. 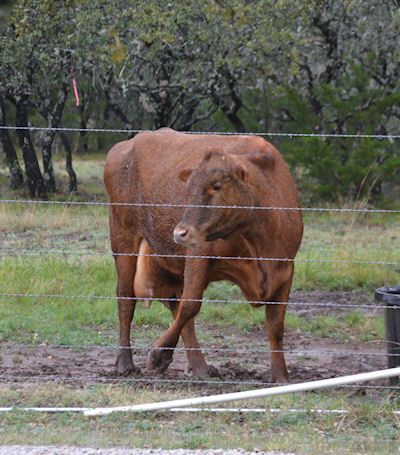 They look like pretty nice cows!  The guy who owns them said “the red one”, which I assume is this one, doesn’t like dogs at all but Speck never goes out when he’s not on a leash so he’ll be fine.  Once the garden is done and the chicken coop is built, I’m going to work on getting a fenced area where I can get a couple of goats just for fun.