For too many years, when we would find old sewing machines, Featherweights, 301, 401, 403, 99K, and the like, we’d buy them.  We’ve cleaned up and given away quite a few of them to folks who thought they might want to learn to sew.  I’m not sure many in the younger generations ever realize that some of the old machines sew as well as many of the newer, fancier machines when all you need is a straight stitch.  On several occasions, I’ve been told “No, thanks!  There’s a new machine I can buy at Wal-Mart for $99.”   I can look back and see how many times I’ve thought that way about things too.

Before we left MO, I gave two 301A machines to young moms who wanted to learn to sew.  I still have several but I knew there was one missing.  I’d asked Vince several times if he had seen a 301.  No!  Hadn’t seen one.  They’re all in your sewing room I think!

Every day I try to unpack a few boxes.  Yesterday I went upstairs and look what was sitting at the end of a row.  In plain sight! 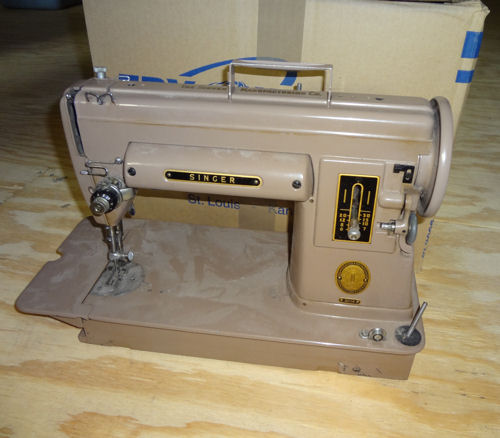 I hadn’t been up there in a few weeks but we’re trying to get everything unpacked and in the right place before the summer heat gets here.  It will be miserably hot upstairs in the shop and I don’t want any of my canned goods up there (and some probably are up there in boxes that haven’t been unpacked) and I don’t want to be going up and down those stairs a lot during the summer.

At the end of another row, I found this machine. 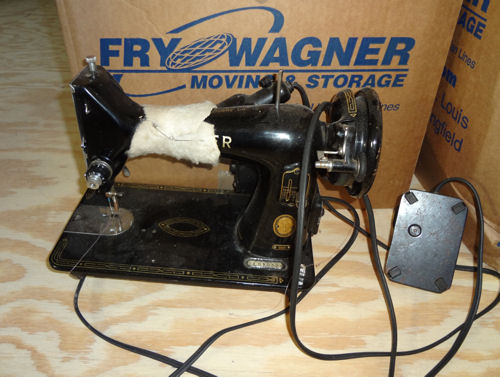 This little 99K machine is in good shape but I thought we had given it away.   It was in a cabinet but we didn’t keep the cabinet.  I’d like to find the little box they fit into but it’s way too heavy to carry around and it’s belt driven where the 301 machines are gear driven so I don’t have a lot of interest in the 99K.  I’ll get Vince to bring it downstairs and I’ll clean it up and keep it since it made the move with us.  I do believe all the sewing machines are accounted for except for a Singer 401A, which Vince thinks we gave away and I don’t remember giving away but we haven’t seen it in a few years so maybe he’s right . . he usually is!  🙂