Saturday Vince got up real early and went out to the shop and began going through boxes. I kept sleeping til Speck demanded I get out of bed and fix his egg.  If only I could teach that dog to fix his own egg!  Vince was searching for his hand saw to begin working on the chicken coop.  He searched til I had breakfast done and after breakfast, he went back to searching more . . boxes and boxes and no saw.  It’s so hard to find anything when there’s that much stuff but he did find some things he was happy to find.

About mid-afternoon, Vince came walking into my sewing room. 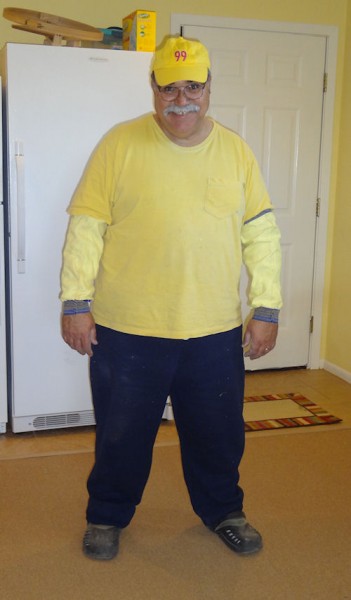 The last time I saw him, he had on a yellow T-shirt, but now he had on  yellow gauntlets (which he found in a box) and a yellow 99 Bananas cap (which he also found in a box).   This is making me re-think whether I should have painted my walls yellow!  🙂  It’s so hard not to crack up laughing when I look up from my sewing and see him dressed like a banana!

He found his handsaw and he was happy and . . he was heading back to the house for a nap!