Do you remember last time we got baby chickens?  We were going to get them and then we weren’t; and then we were and we weren’t.  And then we did but we had no chicken coop!  Not a problem .. Vince was going to build a coop.  The baby chicks were so cute residing in the Rubbermaid tote in the basement.  We took videos of them and lots of pictures.  Then they grew a little and we put them in a cardboard box in the basement.  We loved playing with them.  They grew more and we had to get a huge box.  They were starting to smell and I wanted them out of the basement.

Vince got a big wooden box and moved the chickens outside but not before I threatened to turn them all loose and let them run away from home if he didn’t figure out a way to get them out of the basement.

He was building a coop and in typical Vince fashion, it was a slow process.  Finally he finished it and Jerry, Anthony and Vince proceeded to move it.  That was quite entertaining.

Here we are three years later and I want chickens again since I had to find a new home for the other chickens and leave them in MO.  At least once a week, I say to Vince “How’s that chicken coop coming?” because I know he hasn’t even thought about building it and there’s no way he’ll ever talk me into getting chickens again without the coop ready unless he agrees to let them live in the Highlander until the coop is finished.

Last night I went into the bedroom and saw this in the printer: 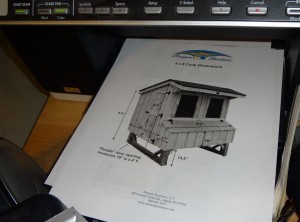 There’s hope!  Someday soon maybe I’ll have a chicken coop and then we can get more chickens.