There are lots of things on my needles. Several are real close to being finished. 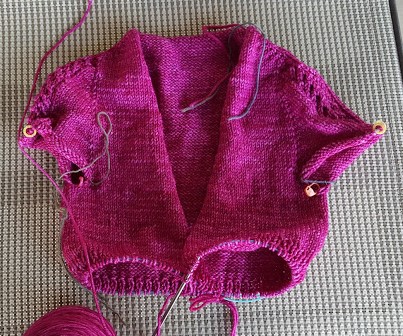 Most of my attention this weekend should go toward’s Addie’s Cardi. I’m working on the bottom ribbing and have to do the front bands and sleeve ribbing (it’s going to be short sleeved I think), sew on buttons and I’ll be done. It’s a size 6 so I’m thinking I’ll maybe plan to make her an Easter dress for next year and let this sweater be part of that outfit.

I’m still working on Fairyhill. I was working on it in the dentist’s office when they called me back so I stopped in the middle of a row and haven’t finished that row so it’s kinda all bunched up on the needles so . . no photo.

I’m also working on Miss Grace. I only need to finish the border but that’s mindless work and I keep saying I’ll save that for when I need a “no brainer” project but I need to just sit down and do it. Same as with Fairyhill. I’m working in the round so it’s definitely all bunched up with over 600 stitches on the needles. Pictures of both of those FINISHED next week . . along with Addie’s sweater, I hope.

Joji’s Starting Point mystery started last night so I’m also working on that. I won’t show pictures of each step til the next step is released so as not to spoil it for anyone who may be working on it.

What’s on your needles?